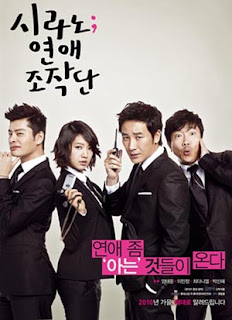 When their theater is about to fall deeper in debt Lee Byung Hun (Uhm Tae Woong) and his friends start a matchmaking agency that help guys make their girlfriends fall in love with them. With their motto “Making her fall in love with you in top secret”, the four have a 99% success rate and take on every client there is.
One day they get visited by a man named Sang Yong (Choi Daniel), who wants their help in making Hee Joong (Lee Min Jung) fall in love with him, Hee Joong happens to be Byung Hun’s ex. In the beginning he tries everything to turn this client down, by making their service expensive or trying to ruin the operations, but is eventually forced to do it. Slowly things between Sang Yong and Hee Joong are getting better, but then Byung Hun starts to get his personal feeling mixed with business..

It’s started out very well, but somewhere along the line the movie just became less interesting and way too common. The director probably thought it would be a ‘different’ way of ending the movie that way, but it just made the entire movie longer and much more pathetic, not that it started out like that though. Every actor was great, and every character was very well portrayed, though they aren’t very well written - like not as deep as hoped. Lastly the couples were trying to create chemistry, but the scripts just didn’t let them. It was too pretend-like happy and lovely, it just became halfhearted. It’s not bad, I just suddenly became  depressed, and disappointed.