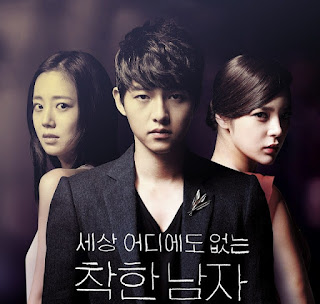 The young man Kang Maru (Song Joong Ki) has a somewhat great life with his girlfriend Han Jae Hee (Park Si Yeon), best friend Park Jae Gil (Lee Kwang Soo) and little sister Kang Choco (Lee Yoo Bi). Even though his little sister is sick and they have been living without their parents for a while, they still manage to lead a great life. Maru is known as the handsome smart guy, studying medicine, while Jae Hee is building her career up as a journalist. Things escalate quite quickly in the wrong direction as Maru receives an urgent phone call from Jae Hee, calling for his help. As he arrives to the hotel Jae Hee is at, he finds her sitting in a corner with a dead man on the floor. As the nice guy Maru is, he sacrifices himself for Jae Hee and her career and turns himself in as the murderer. Several years later Jae Hee is leading her life as the mistress of a CEO while Maru is finding his way around by taking advantage of rich women. Whole on his way back from Japan a situation arises in the airplane and a doctor is needed. As a last resort Maru is forced to help and there he is encountered with Jae Hee and another person, a person that will play a huge role in his life, the patient Seo Eun Gi (Moon Chae Won), the daughter of the CEO who married Jae Hee. Eun Gi and Maru meet several times and Maru slowly starts to turn into a not so nice guy.. or.. does he?..

First of all I want to say that the synopsis that was out on the internet when this drama started, is stupid and makes no sense! It’s as if somebody just knew a few details and just somehow connected it by themselves. They mention that Maru takes advantage of Eun Gi when she loses her memory.. ehmm no. Not in that order. And it actually ruined it a bit for me because I was kind of waiting for that memory loss but it happened later after Maru already began taking advantage of her and he even decided to stop and after that she lost her memory aso I shouldn’t spoil too much. This drama really had me from the start, I know I’ve got a thing for handsome guys and Joong ki is here but still. And I really enjoyed it and then again I had a really bad feeling all the time because of Maru, the character is just.. too much b***hit happening to that poor young man! Like how bad of a life can someone get? Also I don’t know it his character was even realistic, okay maybe it was, but there aren’t many of those people that are as smart and skilled as him, I mean medicine and business aren’t easy stuff. I liked it, I liked it a lot, and I even liked the ending. I think it had a great finish actually. But the last two episodes were quite empty, it felt like that. I havent watched Moon Chae Won act before but I think she did a really great job in this one. And Joong Ki of course too is a great actor. AND Lee Kwang soo, I forgot to comment on that. I was surprised, it was better than I thought it would be though I still saw him more as Kwang soo than Jae Gil hahah. Okay enough from me. It’s a great drama about revenge turning into romance, and about people changing, how much life sucks and how to enjoy it. Hahah. I recommend definitely if you’re into the genre.

Bunji's Verdict
Out of all the 2012 dramas, this one was the one I really wanted to watch, mainly because of Song Joong Ki honestly, but still. The idea, storyline, characters and the couples were good, and made with great care, so they didn’t seem to be random. Though I gotta say 20 episodes are too long, should have just ended at episode 16, because the last episodes were just unnecessary.  It ended up being too draggy and completely reparative. To be honest, the beginning was genius and very interesting, different than usual dramas, but somehow the amnesia part made it draggy and stuffy as hell. I loved Joong Ki’s acting, really had me on hooked, and Lee Kwang Soo was pretty neat, 100% seeing him as an actor now! Moon Chae Won’s acting was real good, but I just don’t like Chae Won, not really her fault though nor is it because of Joong Ki. She just annoys me for some odd reason I can’t put my finger on. One bad thing more, is that the character acted by Chae Won, Seo Eun Gi, annoyed me with her ‘revenge’. Like, no bases at all, actually her fault completely if you ask me, why blame others?!

On the other hand, the drama is interesting, heartbreaking and sad. It’s a perfect Lee Kyeong Hee drama, its unnecessarily heavy and just goes on and on in circles, without you being able to look away. I do recommend, though I personally wouldn’t watch it again, once is MORE than enough. Oh yeah, I didn’t get the ending, sort a ruined my ‘perfect ending’..