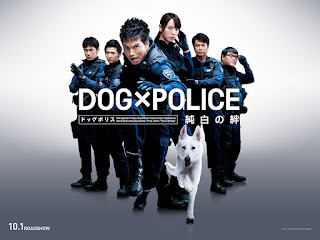 Hayakawa Yusaku (Ichihara Hayato) is an aspiring police officer with the dream of becoming a detective. When a serial bomber racks the streets of Tokyo, he is dreaming of becoming like one of those detectives that solve cases, and actually happens to spot a suspicious man. While running after him and catching him, a man is involved needing to help birth somewhere. Doing his duty, he helps the man, only to find out he is a veterinarian, and delivers puppies. Yusaku witnesses the delivery, and when the last puppy comes out, he is surprised to see it is an albino - and not breathing. The veterinarian says that it is a lost case, but shocked by that Yusaku tries desperately to revive it, and succeeds.
Several months later Yusaku is transferred to a different unit, but is disappointed to find out that it isn’t the detective unit but the K-9 Force. That unit is a dog patrol unit, which teaches dogs to search and to attack criminals. There he meets his instructor Mizuno Natsuki (Toda Erika), a harsh woman, with love for her job. Yusaku on the other hand is annoyed and disappointed in his transfer, so his chief decides to get him a ‘buddy’, a dog. By coincidence he gets buddied up with Shiro, a white dog who happens to be the albino he saved. Slowly he starts to get close to the dog, and they form a bond, but the when the bomber strikes again, it becomes the K-9 Force’s job to help…

Two plusses, Hayato and Erika, and one for the dog Shiro, being super cute, but that’s it. The story is good, but just a bit to newbie’sh for me. I feel good acting, but weak storyline, and screenplay. It almost feels halfhearted, but trying sometimes though, actually getting me teary at the end. So should you watch it? Hmm, it’s not bad, nor is it boring, just yeah, healfhearted…