Arang and the Magistrate Review 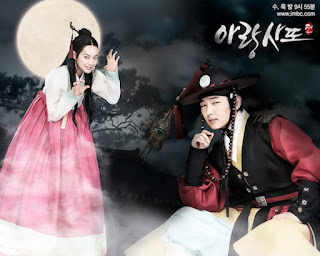 Title: Arang and the magistrate

“The time was the middle of the Joseon period. Man's ambition reached far extremes, the world became chaotic, and nature became distressed. In the midst of such chaos, the boundary between this world and the world beyond ceased to exist. The dead stayed to roam about freely. The ghosts of the dead can see the living, but the living cannot see the dead. However, there was one man who was able to see ghosts. In search of his mother, who disappeared three years ago, he sets out for Miryang.” (taken from the introduction)
While looking for his missing mother in the mountains, Kim Eun Oh (Lee Jun Ki) meets a ghost called Arang (Shin Min Ah), whom he pretends not being able to see. He is used to being asked favors from ghosts since he’s able to see them, so he pretends not to hear nor see them. Arang tells him her story thinking he doesn’t hear her, of her waking up as an ghost on her way to the Styx River(on the way to the afterlife, the dead must cross the river), not remembering who she is and how she died, she manages to run away.
Later on she realizes that he is able to see ghosts, so she decides to make him into a Magistrate of the very city he is in, without him knowing it. Eun Oh, now a magistrate, refuses to help her, until he notices a hair pin that belonged to his mother in her hair. Now the question is why is his mother’s hair pin on a dead woman’s head? He reluctantly agrees to help her, but soon they find out that it is not a typical death, and the entire city seems off somehow…

It’s actually good, honestly. I don’t like historical or period dramas if you wish, mainly because I don’t get any of the society and whatever that involves. Actually the entire “after death” was much easier to understand, even though it was my first time hearing about it, than the society of the Joseon Korea. Like, it’s so easy being called a traitor, heck death happens ALL the time, by simply 2-3 words, ridiculous. Anyway.. I love Shin Min Ah, I love Lee Jun Ki, and I love them together, LOL. Good actors make good drama, so I did look forward to it, and enjoyed it. I have to admit, I was bored when the “bad guys” came on screen, but all in all, pretty enjoyable. Also I found myself on edge, and totally hyper of the Magistrat, while he kicks ass - politically aswell as physically. Hehe.. To sum up, I recommend!