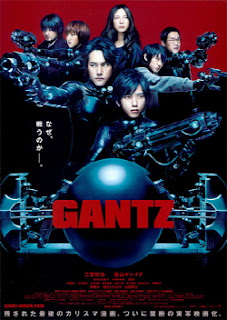 Kurano Kei (Ninomiya Kazunari) was on his way to a job interview, when suddenly a man falls on the subway railroad. Nobody reacts except a young man, which Kei recognizes as his school friend Kato Masaru (Kenichi Matuyama), and decides to help him. The two manage to pull the man up, but get hit by the subway themselves. Suddenly they wake up in a room filled with 5 other people, who also say that they were supposed to die but woke up in the room, and that they cannot get out. When the 8th person arrives, a young naked woman, a huge black metal ball announces where they are: they are here to play a game, where they get an assignment, to kill a target, if they do they get points… What they don’t know is that the targets are aliens and not easy at all…

Okay, to begin with, for what it is, it’s pretty cool, I mean graphics, storyline, and also cast and acting was amazing, but I can’t really put my finger on it. There just is something about this movie that feels off: At first I thought it was the actors, but then I realized that they were doing a neat job. Then I thought about the entire alien / battle royal feel, and somehow I didn’t like it, but it didn’t make the movie bad. Even the action and the “reality” of it was cool, but it might be that it just is a little too geeky for me.. Or something like that…