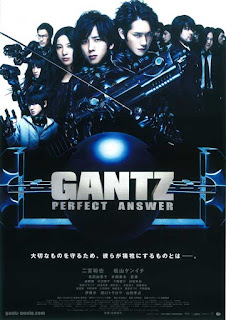 It has been some time since Kato Masaru (Kenichi Matuyama) has died, and Kurano Kei (Ninomiya Kazunari) has been working hard in order to get the 100 points in order to revive him, by taking care of Kato’s younger brother. Kei has been helping and grouping the new members who fight for GANTZ, but mysteriously a small GANTZ is ordering to hill humans. Masamitsu Shigeta (Yamada Takayuki) is a news reporter, who has noticed that some things aren’t right, the missing people and the blown up places. But everything becomes weird, when for some reason Kato returns and he doesn’t seem like himself…

Okay, better than the first one, but also creepier than the first one. Ninomiya is great as always, so is Kenichi, but I still don’t get the entire “fight the alien” part. It’s just weird! Though I had moments of shock, I was confused most of the time, not because of the story, but the flow, like it doesn’t make sense at times. Anyways, if you’ve watched GANTZ, you should watch GANTZ 2…