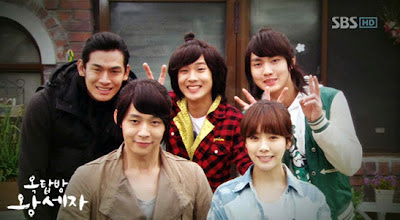 Park Ha/Bu Young (the young Han Ji Min) is to be married with the young crown prince (young Yoochun), but she gets scarred for life by her sister by accident, so her sister young Se Na (young Jung Yoo Mi) is to be married with the crown prince instead. Several years later, Se Na is found mysteriously dead. The people believe it wasn’t a murder, but the crown prince knows it can’t be otherwise and that he must investigate the matter. The same night as the crown prince and his 3 retainers are fleeing from some strange men, they are suddenly transported into the future, and land on the rooftop apartment of Park Ha/Bu Young. Park Ha is the reincarnation of Bu Young, and she somehow ends up unwillingly taking care of the four, teaching them how to get by in the new life. Meanwhile the crown prince also sees Se Na, the reincarnation of his wife, and desperately tries to meet her and find out what really happened. He gets a great opportunity as he finds out his reincarnation had disappeared and his family (rich business family) is looking for him, his reincarnation was killed, and so he also tries to figure out that mystery.

This drama was quite not what I had expected. I was a bit disappointed, maybe because I had too many spoilers on tumblr and I expected quite a lot. But it’s not that it was bad, it really did have its funny moments and the story overall is quite good and I get it, but really not my thing. It’s kinda like I didn’t really know what the whole point really was? For him to realize that whole thing with Bu Young, or to find out who his wife really was? Or what? It had its funny moments and I get that it’s a comedy and fiction but it still had some things that didn’t make any sense, and I know it might not be comparable to Queen In hyun’s man but that one was better. Though the only thing similar is the timeslip thing, so not sure if I can compare. But it wasn’t bad at all and I don’t regret watching it or anything. It’s just not as good as I wanted it to be.

Bunji's Verdict
Summing up in one word: likable. Lol, okay I can’t really sum it up in one word, but the drama has heart (of course depending on the character). The beginning actually captures your attention, but somehow it becomes heavy, though not worse than many others (City Hunter, Man of Honor etc.), you know the entire “rightful/righteous” part. The difference is that in this the lead couple actually fights together, not “trying-to-protect-while-pushing-each-other-away”. Yoo Chun is cute no doubt, and does a pretty good job with the acting as a king, was actually stunned by the acting - it’s been a while I guess. I didn’t really enjoy Han Ji Min’s acting, or being, call it what you want, there is just something that bothers me about her (same with Park Min Young and Park Shin Hye), even though her character was adorable and her acting okay, I found her annoying - but managed to look past her, and enjoy the drama.
Two things bothered me though: One, the fact that they came to the future, but weren’t interested in finding out what happened in the past, and two, the sudden long lost appearance of the mother in the picture… but else, it’s very reasonable..