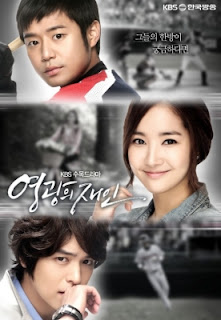 
Kim Young Kwang (Chun Jung Myung) is a falling baseball player, who is thrown into the minor league after a fight with top star Seo In Woo (Lee Jang Woo), and is told that he only has two months to show his worth or he’ll be thrown out of the team. After an accident in a game he is brought to the hospital, but with the twist of fate In Woo is also brought to the hospital with an broken nose. Young Kwang is ignored, even though he is almost dying, but is noticed by Yoon Jane (Park Min Young) an aide nurse, who runs to the doctor in charge and manages to save Young Kwang, only for him to find out that he needs two months to finish his recovery, which means no chance to return to the baseball field. Yoon Jane on the other hand is ecstatic about Young Kwang, telling him that she is his number one fan, after watching him make a homerun when she was younger.
When Jane’s nun from her orphanage shows up and gives her the letters of her father, Jane finally believes that she can reunite with him, only to find out that it is Young Kwangs father. This starts war at home, with the entire family refusing to accept her, and Young Kwangs father refusing to tell the family anything. But the truth is something else: betrayal.

Lol, sorry for the dramatic review, didn’t really mean it : P. I have to admit it’s somewhat refreshing, this drama. I don’t know haven’t watched this kind of drama before, so I sort of enjoyed it, even though it takes a lot of time to finish, I mean really, LONG. The acting was good, the chemistry is not that good, I mean they act as if they were in love, but you don’t really feel it, and I sort of believe it is Park Min Young’s fault: felt the same as City Hunter. I don’t know if it just by coincident or that she refuses to do anything like that, but I really wish for her to at least talk to any of her love interests. I mean kiss, or at least hug. Really ruins your view of the couple.
Anyways, a fresh Korean drama, or at least not a totally draggy one.