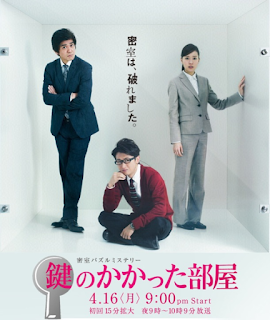 
When Aoto Junko (Toda Erika) officially starts working at a law firm, she somehow manages to mess up on the first day. Her boss Serizawa Gou (Sato Koichi) is sort of a dominant man, but is easily persuaded. The two go to a bank in order to deal with a financial case; the bank director and Serizawa go inside a high tech vault, only to be locked inside by Aoto. When she finds out that the only way to open the vault is the bank director, all hope seems lost. That is until a funny character arrives: Enomoto Kei (Ohno Satoshi) a weird and expressionless person with an incredible mind. He works at a security firm and manages to open the ‘impossible’ vault in matter of minutes. This leads Aoto to ask Enomoto for help, solving a ‘Locked-room-case’ they had been entrusted in earlier that day, which Enomoto doesn’t refuse; because he believes that “There is no room that can’t be unlocked”.

Defiantly one of the best Japanese dramas of the year; not that I have watched that many this year, but so far the best. Ohno Satoshi doesn’t fail to empress me, and Toda Erika is surprisingly good at being bubbly. I really like the theme of the drama, and to be honest, I would never had thought that I would need so much time to figure out who the killer is to the point where I had no clue, and I’m usually decently good at it.
Anyways, the drama is recommendable, so if you missed interesting Japanese dramas you should watch this : )