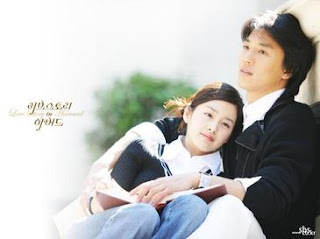 
The story revolves around Korean students studying in Harvard. Kim Hyun Woo (Kim Rae Won) came to Harvard to study law with high hopes, but found himself having a hard time keeping up with his classes. He finds out that not only he, but most of his fellow dorm mates have it the same way, actually to the point of stress.
One night, by accident, he stumbles upon a girl Lee Soo In (Kim Tae Hee) who he starts to get interested outside his hotel hanging around with an old man. When he meets his idol also a teacher the school, he sees them together, and gets the impression of her being a prostitute.  When Hyun Woo needs help for a medical case, he asks for a tutor, and surprisingly Soo In arrives. After the misunderstanding clears up the two get closer, and somehow love starts to blossom, but with a rival just around the corner things get surprising turns…

This drama was recommended to me by fellow drama viewers, telling me it’s probably one of the best dramas ever. I think that the reason I’m not all into this is that I have watched so many of the new ones that remind me of “Lovestory in Harvard” that I didn’t really feel like watching it. It’s not bad, it’s just too typical, a lot of clichés and way to predictable. I guess if I had watched it before when it came out I might have liked it, but with all the other dramas in my pocket, this is just ‘another Korean drama’.
The acting is great, got to expect that from Kim Tae Hee, but the rest were good too. The chemistry of the lead is pretty good, kind of sweet.