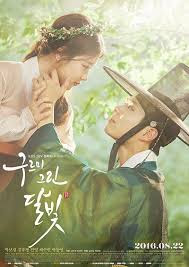 Hong Ra On (Kim Yoo Jung) is a young woman during the Joseon Dynasty who disguises herself as a man named Sam Nom to support herself by ghostwriting and giving relationship advice to lovelorn men. A love letter that Ra On writes for a client brings her in contact with Lee Yeong, who is the Crown Prince Hyo Myeong (Park Bo Gum), the first son of King Sunjo (Kim Seung Soo) and heir to the throne, as well as his trusted guard Kim Byung Yeon (Kwak Dong Yeon). Through a series of events, Ra On gets sold into the Royal Palace as a eunuch and is assigned to work for Royal Consort Soo Ki (Jun Mi Sun) and Princess Young Geun (Heo Jung Eun). Ra On becomes embroiled in a political power struggle with Queen Kim (Han Soo Yeon) and her father, Prime Minister Kim Hun (Chun Ho Jin), who somehow manage to keep King Sunjo in a perpetually weakened, hallucinogenic state. Prime Minister Kim is grooming his grandson, Kim Yoon Sung (Jinyoung), to take over the throne but that would put the young scholar in direct competition with his childhood friend, Lee Yeong, to become the next king. With Ra On and Byung Yeon by his side, can Lee Yeong fight the power-hungry ministers to claim his rightful place in history?

This just became one of my favorite drama this year. 2016 has really brought alot of different kdramas, and i’m lovin’ it! And with those dramas, a lot of young, new and talented actors/actress’ are coming to the spotlight. The personal acting chemistry between Kim Yoo Jung as young, fearless and joyful Hong Ra On and Park Bo Gum as Crown Prince Lee Yeong is the heart of the drama. The youthfulness and impressive acting skills of Kim Yoo Jung ( who is only 17) interacting with equally talented Park Bo Gum (who is only 23) is a marvel that lingers in the mind long after we have turned off our computers. One thing this drama has teached me is that politics is a dirty dirty game, but our crown prince knew how to play it! I seriously loved everything about this drama, the acting, storyline, the directing and of course the OST! This is a drama I highly recommend, saeguk fan or not, this appeals to your every need ;)