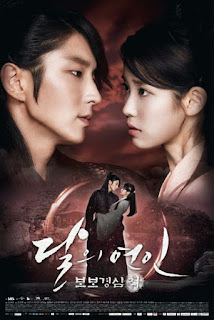 During a total eclipse of the sun, a 25-year-old 21st century woman, Go Ha Jin (IU), is transported back in time to Goryeo Dynasty. She wakes up in the year 941, in the body of 16-year-old Hae Soo and there, she encounters the many royal princes of the ruling family. She initially falls in love with the gentle and warm 8th Prince Wang Wook (Kang Ha Neul), and later Wang So (Lee Joon Gi), the fearsome 4th Prince who hides his face behind a mask and is given the derogatory label "wolf dog". Meanwhile, rivalry and politics ensue among the princes, in a fight for the throne, as Hae Soo finds herself unwittingly caught between it all.

Throughout the drama I had a lot of problems with the plot, like major problems. One of them is the total neglecting of Go Ha jin/Hae su is from the future. We can’t really categorize this as a time-travelling drama, since the only factor about it is in the first episode where she went back in time. After that… NOTHING. Some other problems came along too, but somehow when I finished the drama, and started thinking about it, I couldn’t have felt more satisfied and in love with it. There is something about it, that kept me watching till the end, and got me hooked week after week, just waiting for a new episode. So yes, those problems I had just vanished after a while, and Moon Lovers got a special place in my heart. The actors were all so good! I loved them all, I had some problems with one of them (Ehm-Baekhyun-Ehm), but he matured throughout the drama and some character growths. Lee Jun Ki and IU became one of my favorite drama-couple this year, they had a magical chemistry that’s rare to find, maybe it’s all the tragic, dark and bloodthirsty surroundings that enhanced it all. This drama is also another drama I would recommend to everyone, saeguk fan or not!