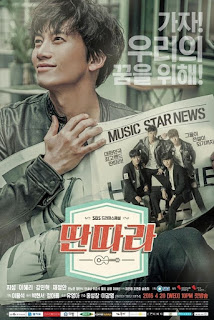 Shin Suk Ho (Ji Sung) is a successful manager turned director who works for KTOP entertainment, one of the largest entertainment companies in South Korea. After deciding to become independent and trying to develop his own company, Mango Entertainment, he suddenly faces many hardships and loses everything he has and goes to prison. After release, while he is trying to find a way back to life, he finds a talented high school student, Jo Ha Neul (Kang Min Hyuk) and decides to turn him into a famous singer. But he realizes that Ha Neul is an ex-convict and was accused for sexual abuse by his friend, Lee Ji Young (Yoon Seo).

The plot of this drama is very normal and ordinary. Me being a big fan of Ji Sung and have watched every single one of his dramas, would not miss this one. So of course I had high hopes for this drama, but the only thing I could think while watching: “What were the writers and director doing with such a predictable and cliché story, and they chose such a huge and awesomely talented star like Ji Sung as the lead?! Why”. I’m not sure I have a single orderly opinion about it. I enjoyed it at points. I found it frustrating the rest of the time. If you are looking for alternate reason to ignore this one, then let me give you several. Besides the unnecessary attempt at a love triangle dead on arrival, the writing is shit. I mean, completely shit. And that two episode extension didn’t help anything. The premise was thin enough without trying to spread it out over two more hours. Some moments and some performances were solid, but overall I felt I might have wasted my time on this one. Since I have nothing better to say, I'll stop here.

This drama… I went in and expected it to be “shit” (quote from Kamji), and ended up enjoying it. This drama is what you call a “modern” Korean drama, which has ALL the charms of a Korean drama, except it unfortunately falls into the category “another Korean drama”. There are quite a few these days, because the audience has become picky and judgmental. The competition for Korean dramas has also risen, which means now the dramas must be EXTRA creative to be liked or watched. This drama is one that has unfortunately fallen in that category, but it is actually like all the dramas we all liked just 2-3 years ago.
I enjoyed the screenplay, characters and most defiantly the story, but I must say, Hyeri was useless. Her character, her acting and her overall existence in the drama was unnecessary and quite frankly a pain. I understand what Kamji says about the love triangle - UTTERLY DUMB AND UNNESESSARY. I needed up playing on my phone every time she was on the screen – I really don’t understand WHY, she was needed.
Ji Sung was made for this role, and honestly, he made this character alive. Everyone else was good (except for Hyeri), and I think that if they didn’t have the love story forced on the storyline (and down our throats), this would have been great drama. Also, I agree that 18 episodes was too much – why they needed 2 episodes more to show that annoying love triangle beats me.
But to sum up: a good Korean drama that I think I could recommend to new watchers or Ji Sung lovers.