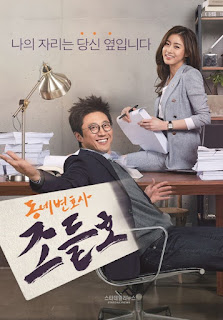 Jo Deul Ho (Park Shin Yang) lives as a beggar ever since he was betrayed by his chief. He lost his wife, home and position as a well-known prosecutor at the high court. He has no ambition left nor any wish for revenge, as his only reason to stay alive is so he can see his daughter get married when the time comes.
Everything changes when he runs into Lee Eun Jo (Kang So Ra) who is chasing a pickpocket. When finally catching the pickpocket he is surprised to find out that the pickpocket is his fellow orphan Kang Il Goo (Choi Jaw Hwan) from the same orphanage. At first Il Goo refuses to see Deul Ho, but soon warms up to him, only to pass away shortly after. Il Goo’s death leaves Deul Ho enraged and he decides to get to the bottom of the murder, which leads him back to schemes and corruption he had faced before, and had lost. This time he is determined to have justice prevail…

This drama I watched as it aired due to the quite interesting screen play and intriguing story. Though I found 20 episodes to be pretty long I have to say that the overall drama is really good. I remember Park Shin Yang from SIGN and I loved him there, so this I had to watch. I was quite annoyed at Kang So Ra’s character, I found her to be over acting. I haven’t really watched much of her dramas, but this is not something I would pin her as a good actress for. Generally, the female cast was just so typical and fairly dull, except for Hwang Suk Jung – the one that acted as Mr. Jo’s assistant – she was quite fun.
The drama is pretty typical as a Korean law/romance drama goes, but other than that I liked following all the legal stuff. I wasn’t really interested in the coupling or other things like that. So I enjoyed it.
To sum up, a typical Korean drama with a little bit of 2010s.