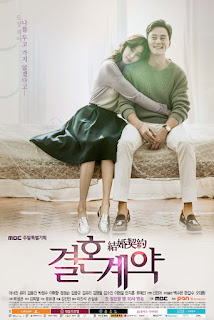 Kang Hye Soo (Uee) is a single mother who struggles to raise her daughter while paying off her late husband's debts. Han Ji Hoon (Lee Seo Jin) is the son of a chaebol who seeks a contract marriage in order to save his mother, who needs a liver transplant. When Kang Hye Soo is diagnosed with an inoperable brain tumor, she agrees to marry Han Ji Hoon and donate part of her liver to his mother, in exchange for enough money to provide for her daughter until she reaches adulthood.

This drama is one of those typical Korean predictable melodramas there is out there. However there is still a hint of something new, it was well written and executed. It didn’t get boring or dull, but rather after every episode it keeps you hunger for the next one. So yes, a very enjoyable and interesting drama. Uee’s acting has definitely improved throughout the drama; she really managed to get that motherly feeling from her, despite her young age. What is a review without mentioning the chemistry between the leads? Here I have to put my hands up and surrender. When I started it I had NO idea what I was expecting from Uee and Lee Seo Jin, mainly because I kept thinking of the big age-gap. After finishing the drama I must say they proved everyone wrong. They had one of the really good screenplay together, enjoyed watching them interact with each other and especially with that little girl! The reason why I’m not giving it full ratings, is because it had too many characters that was ignored or just needless.