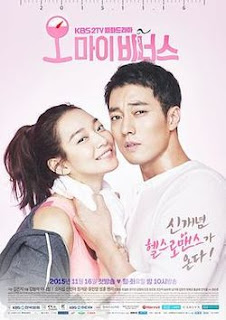 Kim Young Ho (So Ji Sub) is a personal trainer to Hollywood stars. Despite his family's wealth, Young Ho suffered a devastating injury in his childhood, but he believes any problem can be overcome by patience and determination. Kang Joo Eun (Shin Min Ah) was once an ulzzang in her teens, semi-famous for her pretty face and enviable figure. Now a 33-year-old lawyer, she has gained a lot of weight since. After getting dumped by her boyfriend and being told by her doctor that she has health issues, Joo Eun hires Young Ho to challenge her to diet and lose weight.

Wow, did I enjoy this drama? I would say a little too much! Welcome back So Ji Sub *clap clap*! It is the cutesy romance drama I’m always looking for but can never seem to find. There is so many cute scenes, you actually get enough of it in the end (I know, it sounds impossible, but…). To be honest, I felt as though the first couple of episodes were somewhat boring. However, I stuck with it because So Ji Sub is one of my favorites, and after that I fell in love with the cast as a whole and the storyline. It picked up later on in the drama, and the unfolding situations made me holding my breath every week. The last three episodes though, were kind of drama-free, (The writers may have run out of ideas) so it was pretty much focusing on the relationship and chemistry between the leads. All in all a very nice drama, not my favorite though, but a recommendable one! It’s funny how two of the most talked about dramas (this one and She Was Pretty) from the end of 2015 are both about turning pretty again.