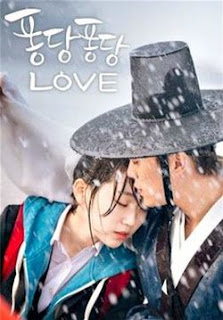 Dan Bi (Kim Seul Gi) is a senior high school student who has to take the College Scholastic Ability Test. She gave up studying math due to the stress. On the day of the test, she falls into a time lapse and landed in Joseon era. Lee Do (Yoon Do Joon) is an unstoppable king who puts his efforts in everything because he received the throne at a young age. Due to a misunderstanding, Dan Bi was brought into the palace in hope that she would bring rain after 3 years of drought.

One of the cutest little thing out there. I think it was perfect in all aspects. IF I had to pick one thing I didn’t like, I would say it was a little too short for me, I would love more of it, make it into a long drama, and use the SAME cast! However, that’s just my wishful thinking. The plot was interesting and it wasn’t dragged out with some unnecessary stuff. Yoon Do Joon as a king really surprised me. I haven’t seen much of him (only in IRIS 2), however with just this production I wanted to see more of him, (already started Let’s Eat :b). I just love this actress now, Kim Seul Gi, she really is one of a kind, or maybe because she only played those crazy, hilarious, over the top characters, she got a nice reputation in my eyes. If you are feeling down this mini-drama will definitely lighten you up, so what are you waiting for. Watch it <3

Hmm, being a historical drama pessimist (my new title), and a history lover, I have to admit I hate these time traveling stories a bit. Not that they all are bad, but they kind of ruin my thought of how I perceive historical events and stories. I am actually a huge time travel lover, but Koreans are just bad at it (of course with exceptions: Queen In Hyun’s Man). From the beginning a lot bothered me, and when I finished episode 1, the second episode was just not on my ‘to watch list’. BUT! I am glad I watched it.
The second part/episode was a bit better and far more realistic than the first one, and the fact that they added the lack of history behind Jang Yeong Sil to their advantage by using time travel was one of the reasons I generally love time travel stories (I am seriously trying not to spoil anything).
At the beginning I was furious they used King Sejong’s story, but as time passed I realized if any other king was used she’d be dead by a few seconds of arrival. So I kind of accepted it and enjoyed it to be honest.
So do I recommend it? Well, for a 2-episode web drama it is pretty sweet (maybe too much for my taste), so yeah. Go watch!