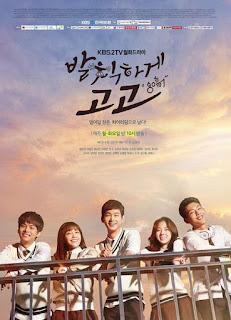 Set at the elite Sevit High School in Seoul, the drama follows the lives of five students as they attempt to survive in a vicious environment where academic elitism takes place. Kang Yeon do (Jung Eun Ji) is the leader of an outcast street dance club "Real King", a group of students who band together because of their poor academic performance, whereas Kim Yeol (Lee Won Geun) is the President of "Baek Ho", an elite club comprised of students from the top 5 percent. When the two clubs are forcibly merged to create a cheerleading squad, the two put their differences aside for the benefit of their clubs.

This started out really well, I fell in love with it almost instantly. Who can say no to those handsome guys! However I guess they blinded me for a moment, because after a while (not too long, after all it’s only 12 episodes) you kind of feel that the drama has fallen into a cycle. It keeps repeating itself constantly. Same problem, different characters. It was a well-produced drama, I liked the cinematography, (the school was so fancy!), all the actors lived up to their potential. There were a lot of newbies, but you couldn’t tell that it was their debut drama, I guess the standards for actors are rising in Korea :b Eun Ji did really good, I liked her very much in this drama, to be honost I’ve liked her since Reply 1997 and watches all her dramas, she never disappoints! As for the plot, it could have been better, that was the only thing that takes the drama down. Sometimes even though how good the actors are, they can’t save a boring plot. Overall, I want to recommend this, but I’ll have to warn you that the story can get on your nerve!