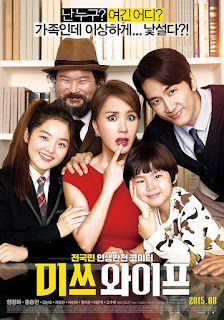 Yeon Woo (Uhm Jung Hwa) is a successful lawyer who is killed in an automobile accident. She wakes in heaven to find that her death was a clerical error and it was actually an old woman with the same name who was meant to die. To hide the mistake, she is asked to live as another woman – a housewife who was also killed by mistake – for just one month. Married to a very ordinary civil servant named Sung-hwan with a difficult teenage daughter and a precocious six-year-old, Yeon-woo finds herself changing in unexpected ways.

A nice, heartwarming, encouraging movie, perfect for a nice sunday evening. Personally I didn’t expect anything, but I hoped that I wouldn’t waste time on this movie. Turned out when I realized the movie was over, I wanted even more, I just couldn’t accept where it finished. I wanted to see more of what happens to the family. True, the beginning was slow, but that’s typical for all movies, because you need time to get to know the characters and the situation. However this movie before you know it you are just drawn to the story, and the family members. I loved them all, from the harsh ‘mum’ (well-played Uhm Jung Hwa), and the easy-going dad to the very typical but irresistible kids. It was a little typical plot-wise, since it’s not the first time the ‘back-to-earth-after-dying’-theme is presented in a movie. There was a moment where the movie gets so emotional, it made me shed some tears, but it handled it so realistically (except for the part where she is given a second chance in life), it was not exaggerated in any way. Totally recommendable movie!