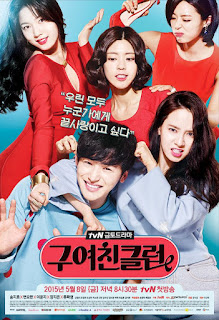 Kim Soo Jin (Song Ji Hyo) is a movie producer at a small film company, while dreaming of becoming noticed for her hard work. This dream is shattered when her CEO of the company makes the company go bankrupt and runs with all the money. The only way she'll be able to get the company back is to work with the last movie deal she had put in motion: a movie based on a webtoon called Girlfriend Buffalo/Buffalo Girlfriend - a story about the authors three ex-girlfriends. She soon finds out that the writer is called Bang Myung Soo - which is her first love and ex-boyfriend.
The two agree on making the movie, and in a drunken frenzy decide to call the three girlfriends: Na Ji Ah (Jang Ji Eun) is an elegant divorcee owning a restaurant, Jang Hwa Young (Lee Yoon Ji) a bossy and demanding manager at a famous movie company, and Go Ra Ra (Hwa Jung) an actress known for her looks and her aloof personality. As the four meet for the first time and the three ex's refuse to allow this movie to get going, as they want create their own characters - so Hwa Young buys the movie rights.
Things become even more confusing as Hwa Young's current boyfriend is the CEO of the famous company, but unaware of Hwa Youngs past - so the 5 have to pretend to be friends...

Hmm, I found this funny, cute and extremely over-the-top ridiculous, which made it really fun. The leads are good at playing opposite each other, but the supporting actors, the ex-girlfriends, are really good at keeping up with the leads. There are actually several thing I could point out here which were annoying, but the most annoying one was the lead actress, Song Ji Hyo. I like her and she was the main reason for watching this type of drama, but she seriously let me down. I am not sure whether it is because of the bad character, or Ji Hyo's bad acting that made the female protagonist so dull and boring that I really didn't feel like watching her. Maybe it is because the other three actresses where strong characters that the character drowned.
Okay not to ruin it for you, and you might not agree with me, so as whether you are to watch it or not, I would say, give it a try - it really is good for the laughing muscles.

I loved it. So interesting and hilarious, and the actors were all awesome! Song Ji Hyo daeebak! Where do I start explaining this feeling. It’s not one of those dramas that just have all the feels and tension and excitement, no. But it’s easy to follow, the story unfolds gradually, there is no secret or backstabbing what so ever (maybe a liiiitle in the beginning, nothing serious though), the chemistry between the leads is amazing. PLUS the chemistry between all the exgirlfriends are so speciel I loved it, yeah it sounds weird, but the writers did a god job with the story so you can’t really do anything than love them. Last time I watched Byun Yo Hyo was in Misaeng, and I gotta say he got them charms :b Ehm-ehm.. I mean the talent for acting.
All in all a really nice drama, soooo damn sad TvN decided to cut it down. Just because the ratings in Korea are bad, doesn’t mean us overseas fans won’t like it. They should stop doing that seriously.