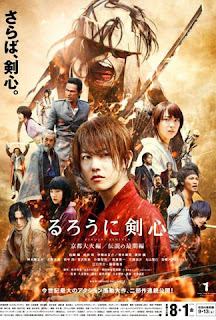 In the year Hyogo 1878 (Meiji Era 11), the Japanese law enforcement are trying to catch the ‘new battousai’. Due to Kenshi (Sato Takeru) leaving his samurai ways and lives his life in peace with his friends, the new battousai, Shishio Makoto (Fujiwara Tatsuya) has been creating havoc around Japan. Because of that the home minister, now currently one of the tops of the government, asks for a meeting with Kenshin. When he arrives Kenshin is asked to kill Shishio, as Shishios main goal is to get revenge and destroyed the new government.
At first Kenshin refuses since he enjoys life as it is, but when he is shown what Shishio is doing to the country, he partly feels responsible as Shishio took over his past position. So, by leaving his new life, Kenshin sets out to find Shishio, but finds out that he is much less powerful than Shishio, as he isn’t even able to beat Shishios underling… Will the old Battousai show his past colors?

The more I read my summary the less I like it. Oh well, I hope I don’t ruin it for the ones that want to watch it.
Anyways, an awesome movie, like so amazing: from the acting to the scenography. Like everything is so well-made! And it is amazingly well created! I don’t know if you’ve read the manga, but they are very honest to the story of the manga - I think I mentioned that before? Oh and Sato is sooo cool! And Fujiwara I almost didn’t recognize! Omg, and Kamiki!.... Sorry! Fangirl mode!
This movie has all my favorite things, though I am not a fan of fighting, I was kind of amazed by the fight scenes. SO much that I noticed EVERYTHING, and that is rare for me. You can actually watch the first movie without watching the second and the third, but you’ll miss out! I am telling you!