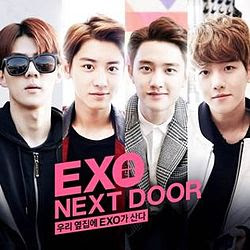 Ji Yeon Hee (Moon Ga Young) is a 20-something year old girl, who hasn't yet dated because she blushes terribly and is completely paralyzed when she's near a good looking boy. One day, four members of EXO (A univers-well-known idol group) are trying to keep a low profile, and move into the house of one of the member's grandfather. However, it turns out that EXO members house is right next door of Yeon Hee's house.

Hmm.. I can’t decide whether this was a success or  failure for me. In between maybe? It’s just that it was sooo silly and ridiculous… I mean, none of the members can act properly (I hope I don’t attract anti-fans), BESIDE D.O!! I mean wow, he got his own show going on in this one, I love him from other dramas, so I’m quite happy that he was in this one too. Plus, after all it’s a webdrama, and it’s not supposed to be so serious, so maybe I’m just used to serious dramas. But still.. it was silly cute. I got hooked, however it took me awhile to watch, but I’m happy that I’m finally over with it. The storyline was nice, while watching I rather hoped they had made it into a real drama. I'm not a fan of EXO, but that was really funny and nice to watch. The main couple irritated me sometimes, but they were adorable. I guess I want to watch more of them ^^.