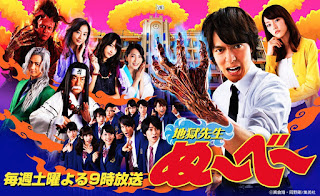 “In this world, there are inhabits of darkness that can't be seen. Sometimes, they show their fangs and attack us. He came in order to protect us an emissary of justice from the bottom of hell... probably.” (Taken from intro of drama)
Nueno Meisuke (Maruyama Ryuhei) is a bit of a dull teacher with no natural skills in being a teacher. On his first day he is looked upon as a weirdo, and the fact that the science teacher Tamamo Kyosuke (Hayami Mokomichu) is more handsome, cooler than he is and has the ability of a teacher, doesn’t make anything easier for Meisuke. His class thinks of him as boring, and when he starts warning them about “Yokai” (like Japanese demons or something like that) they think of him as a complete oddball. But Meisuke is nothing like that. In fact Yokai exist and he, with his left hand stops them from hurting other people. His left hand is a “demon hand” as a demon has taken over it - though reasons why are unknown. Now he has to protect his students from possible danger, without having them know about his hand. Will he manage?

I started this one because I needed a high school drama, and I wanted to watch Chinen, so I got both. The really fun part was that I enjoyed watching Maruyama more than anything else. The drama is really not that great, but somehow it is very Kanjani8 like, plus very Maruyama like: kind of goofy, yet fun. The entire ‘yokai’ part I don’t really understand, as I don’t know the fears or stories of hearing or ‘experiencing’ yokai situations - well of course since they are usually famous in Japan. But they are quite nice at explaining them - like even how to get rid of them: which I didn’t know you could until this drama.
Okay, so how is the drama? It is okay, just kind of remind you of the typical Japanese hero fighting story - but yeah I grew up with power rangers, so I loved it!