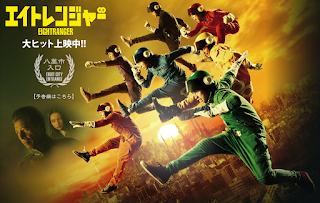 The year is 2035 and the Japanese population is about 75mio. Due to the low birthrates, the economy decreases and as a result the country is divided in two: the poor and the wealthy. The rich live in the central city protected by the law, whereas the rest is left to fend for themselves. Whether or not you are to live in the upperpart or lower part is determined when the child is 6 years old: they take a test, and if you pass you are allowed to live in the city with your family, if not, you don’t have a choice but to live outside.
Yokomine Makoto (Yokoyama Yu) failed the test as a kid, and now lives outside the central city. Addicted to gambling he is hunted by loan sharks daily. That is until he meets Captain Silver, a superhero who saves people in need. He then decides to go to ‘Academy for superheroes’, in order to become one himself, but also earn money. Here he meets 6 other people whom he is told he is going to be the leader of, and realizes that all 6 have debts, which is the reason for joining the academy: Marunouchi Shogo (Murakami Shingo), who is addicted to online shopping. Yasuhara Shun (Yasuda Shota) who is addicted to the color blue, and spends all his money on blue items. Nishikino Tetsuro (Nishikido Ryo) who was part of a one-wonder band, and lives believing he is famous. Okawa Ryosuke (Okura Tadayoshi) a naïve guy believing everyone, and falls for every scam. Shibusawa Kaoru (Shibutani Subaru) an alcoholic. And Muraoka Suki (Murakami Shingo) who is desperate for a girlfriend, he spends all his money on beauty salons.
As the criminal world begins to steal children off the streets, and the police are unable to do anything, the superheroes of the Academy of Superheroes’ called Eight Rangers are set out to save everyone. But for some reason the group of 8 don’t all seem like superheroes… Can these so called ‘heroes’ save the world?

I’ve recently started to watch Kanjani8 because of the laughs they give me on Japanese variety, even though I have watched Nishikido’s dramas and some of Yokoyama’s, I never really watched them together. J-idols are really good at acting together, expecially of they are in the same group, so I simply had to watch this.
Kanjani8 are known as fools, or ‘funny’ group, and really I didn’t expect any coolness out of this movie, so this was quite what you’d want to watch if you are a fan. It is light-hearted, and a bit silly to be honest, but that doesn’t make it any less good. It has a childish feature, so I guess some of the targeted audience is children.
Besides that I had quite the laughs, like due to the different colors of the actors I already knew, but also the interesting characters I got to know. So, yeah a fun movie.

I'm going to put this on my drama list, looks cool :)