Scholar Who Walks The Night Review 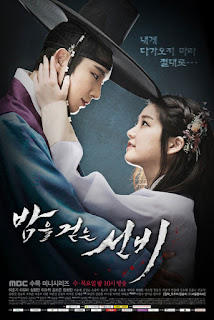 Set in an alternate Joseon dynasty, Jo Yang Sun (Lee Yoo Bi) is the daughter of a nobleman whose family loses everything when her father were framed for treason. To make ends meet, Yang Sun begins cross-dressing as a male bookseller, and meets the handsome and mysterious scholar Kim Sung Yeol (Lee Joon Ki). Sung Yeol is a vampire, and he continues to be haunted by the long-ago death of his first love Lee Myung Hee (Kim So Eun) once he meets Myung Hee’s present-day doppelganger: Choi Hye Ryung (Kim So Eun), an aloof nobleman’s daughter. Meanwhile, the evil vampire Gwi (Lee Soo Hyuk) resides in the royal palace and uses his powers and political machinations to prevent the Crown Prince Lee Yun (Shim Chang Min) from ascending the throne.

What’s up with all the vampire stuff in dramaland lately?! Saeguk AND vampires jut the cup of tea I longed to watch… until I actually started watching it. The storyline was good, interesting. The idea about this evil despicable vampire living under the palace, playing with the king and his ministers like puppets were genius. Even the character were dreadful. However, the whole drama is about vampires, so why make them so weak?! I just couldn’t get excited about it at all! Then the nonsense about if they don’t drink blood at full moon, they will die… is this a vamp-werewolf fusion? I don’t like it, never, just stupid. Then Lee Jun Ki, why did you choose this drama, It totally made a black spot on your career, you need to pick a whole other project next time. I don’t want to give up on you yet. And now, Lee Yu Bi, she's a good actress but I just didn't like her character in this drama. No offence to her, but I hated her character so much I just wanted to skip all her scenes. Lee Soo Hyuk and Kim so Eun were brilliant together, I guess they were the most successful and magnificent choices made by the production. In conclusion, I was disappointed much, but I managed to finish it ;)

Compared to the last Lee Jun Ki drama this one was a bit better, though I am getting tired of his period dramas. I don’t understand why it has to be period dramas all the time, and I am kind of missing the “Two Weeks” Lee Jun Ki now. Anyways, I said better, not necessary good. This drama is too coincidental and is too much “Manhwa” - this is why I dislike Manga/Manhwa adaptions, they never work!  It has too many ‘cartoonish’ elements and as I say, everything and everyone is too coincidental. Even though every actor fits their character perfectly: Jun Ki looks like a handsome undead, so does Soo Hyuk. And they couldn’t find anyone looking more like prince Yi San than Chang Min. Unfortunately, everything else about this drama is a mess. I have to disagree with Kamji - the background story is dumb, I mean it takes them so long to figure anything out.  The characters have no consistency and have bad growth. And I also disagree with Kamji on the second couple. - they were SO boring. Everyone was to be honest. I also felt that the lead actress was an idiot, SPOILER ALERT: Jun Ki’s character changes sooooo many times in front of her, and what she doesn’t notice? What the…
Anyways... My rating is based on the actors and their constant fight to “fix” this drama, unfortunately they fail, but watching them is quite worth the watch - and also I have to give their seriousness some credit.
All in all, not something I would recommend, but the acting is alright and worth a shot in this drama