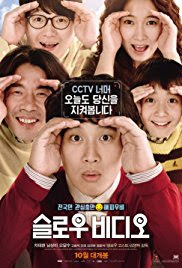 Yeo Jang Boo (Cha Tae Hyun) was born with dynamic visually acuity, which enables him to visually discern fine detail in a moving object that ordinary people cannot, as if he's seeing the world in slow motion. Due to his special ability, Jang-boo has to constantly wear sunglasses, which made him a target of bullying at school and throughout his childhood. He spends 20 years isolated and alone, but his talent proves to be a gift later in life when he finally goes out into the world and ends up working at his neighbor's CCTV control center. One day while unenthusiastically watching passersby onscreen, he spots his first love Bong Soo-mi. Despite being terrible at social interactions, Jang-boo sets out to win her heart.

As the title of this movie, it is indeed very slow. Somehow, they managed to make the first half of the movie go scene by scene, as nothing happened. They used an awful lot of time to show how the character lived his isolated life from the others, if not for Cha Tae Hyun and his adorable acting I would have given up on it. Then the next half of the movie begins and stuff starts to happen, and before you know it, you fall in love with everything! I don’t regret that I kept watching, it was really worth it, you just don’t know it when you start. Cha Tae Hyun of course did a good job; he rather outshined all the other actors, even though I don’t know them I didn’t notice them either. The story were very moving too, It really touched me. Do I recommend the movie? Yes of course I do, you just need at little patience in the beginning, it will all make sense in the end!

This movie was exactly perfect for me - sweet, mellow and not fast paced. Now you think of me as an old lady, but what I mean is that this movie is just perfect for someone who is stressed or tense. It has so much character and personality that you really don’t mind much of it. I was afraid it would be a humor/comedy movie, but was pleasantly surprised when I noticed how serious and fitted funny it is.
Cha Tae Hyun is genius in his acting as always, adapting to a character that well. Though I can’t say everyone else was bad, Cha Tae Hyun was just better (LOL).
The movie in general is a brilliant story, to the point of heartwarming, so I would recommend it. But be warned, it is slow paced.