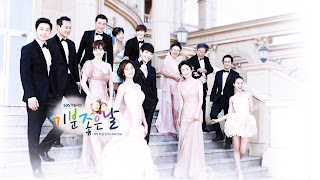 Han Sung Jung (Kim Mi Sook) is a novel writer and a single mother to three daughters. Usually she is an anonym writer and writes biographies for other people, but then she releases her first novel with a publisher she has been working with for over a decade. After 2 weeks her book became a bestseller and she becomes a bestseller author for a short while.Until she realizes she has been scammed. Han Sung Jungs only wish is to  marry her girls to good and respectable men. Her oldest daughter Jeong Da Ae (Hwang Woo Seul Hye) works at a pharmacy, she introduces the man she fell in love with to her mother; a doctor, the only problem is that he is a divorcee and with a kid. Jeong Da Jeong (Park Se Yung) is the second daughter, she is a free spirited tomboyish girl, who protects her mum and sisters from any harm. Han Da In is the maknae, the father of the girls died while she was still in the womb, so she got her mums last name instead. Her dream is to be a famous photographer, but first she needs to graduate university.

I like it. I really like it. This is by now my favorite family drama of all time. Okay, not THE best, but definitely in my top 5. I liked everything about it, from the multigenerational family to the single-mother family and all the multiple encounters between them. It was a well-written drama, actually the writer is the same as the one behind Smile, You, which is also one of my favorite family drama. The same concept and some of the actors are the same too. Glorious Day was so delightful to watch, there were of course a few clichés, but a drama with that length would need a miracle to deviate it. All the characters were very well written, with each episode I was excited to see where things would go, even with the side stories. I have to highlight the best thing with this drama in my opinion; the grandparents! They were so lovable, kindhearted and loyal to each other and the family, best couple keke! If you’re looking for something extremely enjoyable to watch, but don’t trust all the family dramas out there, I can ensure you this one isn’t your average. Even if some of the storylines are cliché, there is enough cuteness to keep it interesting. The lovely, close family dynamics are a joy to watch.