What Happens to my Family? Review 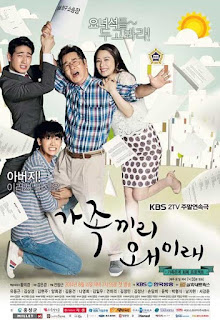 Every family has its difficulties, but what happens when the head of the family is not being appreciated? Cha Bong Soon is the father of 3 kids, together with his sister and her family, they live together under one roof. He own a tofu shop, and is a very gentle and easygoing father, most important he loves his kids very much. The oldest daughter Cha Kang Shim is in her late 30, she is single and a hard working secretary for the chairman at a big company. She is demoted to be a secretary for one of the directors in hope that she can help him be more human. The second child is Cha Kang Jae, the coldhearted son who became a respectable doctor despite his poor family, he rarely speaks to his family and is very ashamed of them. One day the hospital’s director offer him to marry his daughter and secure his position at the cancer center.
The youngest of the three are Cha Dal Bong, he is the failure of the family, when he finally gets a job he realizes he has been tricked into a pyramid scheme. He can’t tell his family, so he seeks help from a girl he just met, but recognizes her as ‘the girl from his past’.

Finally done! It has been a long ride since August, and 2 episodes every week was killing me. Not that it was so good I couldn’t wait, I just couldn’t wait to finish it and wipe it out of my memory. It’s hard to actually summarize my feelings and opinions for a 50+ episodes, it had it all, good and bad things, but mostly bad, in my opinion. I kept noticing the bad acting and although they are all known as pretty good actors, they just felt so awkward together. That is a biiig minus for a family drama in my opinion, the most important thing should be the interactions and feelings between the family members, but all I saw where the awkwardness between them. It’s not a serious drama, its more to the comedy side, there didn’t go one episode where I didn’t laugh at least once, I love comedy dramas, but the storyline just didn’t match with the humor, I guess it ridiculed the whole point. I loved the head of the household; I could really feel his pain and desperate hope for his kids. This drama really empathized with what many single parents are going through to raise their kids and how society is actually looking down on them. Maybe that was the whole point with this drama, to make people realize the struggle. The drama itself wasn’t very exciting or anything, but somehow you still continue to watch it every week in order to know what happens next with this family.