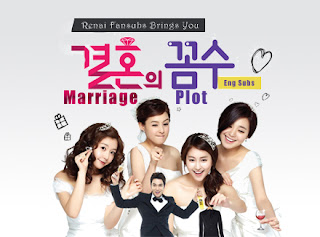 So Doo-Ryun (Cha Hwa-Yeon) has four daughters. Since her husband passed away she runs a kimchi making company; Chinjung Kimchi, and has raised her four daughters by herself. The first daughter Sun-Hee (Lee Young-Eun) is sweet and respectable. Her second daughter Gun-Hee (Kang Hye-Jung) is selfish and competitive, and have no affection for the family. Her third daughter Min-Jung (Kim Se-Jung) likes buying expensive items and playing around. Her fourth daughter Min-Ji (Park Min-Ji) has been prepping to enter college the past four years, but she isn't interested in studying. Gun-Hee works at a food company Sangcharim, where she works hard at the company, but doesn't get along with her boss Gang-Jae (Lee Gyu-Han), who is the son of the company owner. Gang-Jae and Gun-Hee work on a project to launch a Kimchi business, but due to Gun-Hee's mistake, the company fails to get investments and results in Gang-Jae's father becomes so upset at their failure, he orders his son to go to Alaska. Gun-Hee sends in her resignation to Gang-Jae, but this only makes Gang-Jae learn by chance that Gun-Hee is the daughter of the kimchi making company Chinjung. Meanwhile, So Doo-Ryun regrets that she did not raise her daughters so well and hopes to change their ways, so she make up a brilliant plan to change their lives.

I never felt so conflicted about a drama; it was good AND really bad. First thing I noticed and kept bugging me the entire time was the bad acting by Kang Hye Jung, I expected more from her. Nevertheless, thank god Lee Kyu Han was the male lead, he really outshined Kang Hye Jung, and made the drama watchable. Lee Kyu-han really sold the show from a whole range of emotions from crazy happy to crazy in love to crazy depressed. Or maybe he’s just crazy. In fact, he outshined everyone else, except for the mother. But hey, she is a senior actress with a lot of achievements, so nothing to say there, and her character here was very loveable and realistic. I do feel cheated by this drama because we never got any hijinks to live in a boardinghouse. No forced living situations or hilarious face-offs apart from an early challenge between the men vs. women. It would have benefited the drama to call it something else than Marriage Plot because there was simply no plotting to be had.