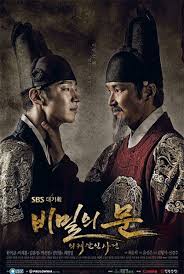 This drama is the historical remake of the conflict that occurred between the Joseon King Yeongjo (Han Suk Kyu) and his son the Crown Prince Sado (Lee Je Hoon). They had two very different ways of how to rule the country. King Yeongjo wanted to pursues the strong royal authority, and to strengthen his political power. While Crown Prince Sado insisted on the more ideal thought of equality for everyone. It was known that King Yeongjo, even after 30 years on the throne felt threatened by his son, and therefor he sentenced him to death. Nevertheless, mystery surrounds Crown Prince Sado’s death, even 100 years after. This drama will explore the truth behind one of Joseons greatest struggle for power.

This show takes Korean dramas to a whole other level. I have to start with saying I’m a geek when it comes to history, it’s one of my passions, so I really enjoyed this drama. Especially when I know that, it’s based on a real event.  Yes, this is a very powerful drama with an awesome cast line; if you are a saeguk fan (like me), this is a definite watch. This story has been tackled so many times in dramaland, that it makes it no easy job to bring an exciting and thrilling atmosphere to it. Just in 2014 there is already two works about king Sado, (Bonus info: Yoo Ah In plays King Sado in the movie!!!)
After watching the first episodes, I realized that this was a little different from the others; somehow, I was so confused I couldn’t continue, so I decided to research the background for this mysterious king. In addition, it definitely helped me get through it, and it opened up so many questions about him. Now I know why every historian thinks he is interesting.
I was surprised they casted Le Je Hoon as king Sado, and that’s because I’ve only seen him in Fashion King (2012), and he really didn’t make an impression on me, plus he really doesn’t have other projects, so he is kinda unknown. After watching him play this role, I see why they said he is the perfect fit. He really pulled out an amazing and interesting character I think only he can do, and the fact that he is kinda unknown in dramaland makes him perfect for this role. You’ll see why in the drama :b
All in all a very interesting drama, that I’m happy I decided to watch, the reason it doesn't get the perfect score is because of the lack of romance, in real life King Sado was known as the ladies man :b