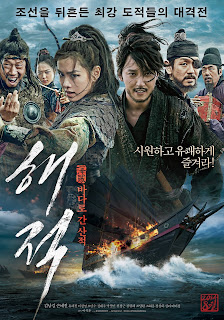 On the eve of the founding of the Joseon Dynasty, a whale swallows the Emperor's Seal of State being brought to Joseon by envoys from China. With a big reward on whoever brings back the royal seal, mountain bandits led by Jang Sa-jung go (Kim Nam Gil) out to sea to hunt down the whale. However, he soon clashes with Yeo-wol (Son Y Jin), a female captain of pirates, soon after an unexpected adventure unfolds.


Hmm, I don’t really know what to think about this one, it wasn’t exciting or anything, but then again, it didn’t bother me. I guess I just sat there 2 hours straight and just watched without thinking. You know those movies where you really don’t mind anything, lol, that was a crappy explanation. BUT the scenes involving that humongous whale are done with jaw-dropping skill, as we see Yeo-wol communing with the gigantic beast underwater. The whale manages to give the most moving performance in the film, sadly enough it wasn’t the actors. I can’t believe they won awards for this presentation, I mean.. I saw better performances than this, Kim Nam Gil was the best of them all, but he wasn’t even nominated. One more unfair decision to add to the list for 2014. Let the ratings speak for themselves.

Posted by Anonymous at Thursday, December 18, 2014