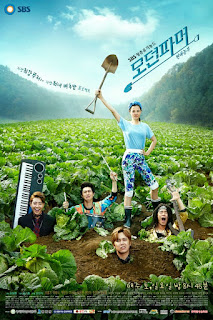 Lee Min Ki (Lee Hong Ki) is the leader of a rockband called ExSo, short for Excellent Soul. It consists of 3 other members Kang Hyuk (Park Min Woo), now an intern at his father’s hospital, Yoo Han Chul (Lee Shi Un) who has been diagnosed with cancer, while Han Ki Joon (Kwak Dong Yun) is preparing for the national exam for the 5th time although he lost hope In ever passing it. Lee Min Ki himself is drowning in debt, nevertheless he hasn’t given up on his dream of becoming a rockstar, he then inherit a piece of land outside the city. He can’t put it for sale, so he decides to start a cabbage business where he grows his own cabbage. For that he needs the help from his band members, and therefore he ought’s to gather his friends once again, and promise them to release an album very soon.

Lee Hong Ki! My one and only reason for watching this drama, and wow I wasn’t let down by his acting. This is the most suitable role for him, and he did his job exceptionally good. I have not come across any quality comedy like this one, in my entire drama-life. Really hilarious, sometimes it was beyond absurd, but you would still laugh it out. I remember I couldn’t wait for the storyline to develop, it was full of surprises, can't really predict what's next. Lee Hong Ki's acting and expressions are great! Lee Si Eon is good too - he got some explosive funny scenes in the drama. Park Min Woo is cute with his beautiful dimpled smile.
I liked all the couples, they each shared the spotline EXCEPT for the main couple, they got no ‘connection’ time at all! Well, I didn’t hate it, but it’s so different from all the other Korean dramas. The main couple would at least show some chemistry, but this drama ended in a note that left you wondering if they ever were together. But that’s great for me anyway, didn’t like the main actress anyway. Honey Lee, I can’t really remember her other works, but she definitely didn’t stood out in this, so it made me wonder why she’s so popular in Korea. Enough of her, the drama itself were excessively good, and I’m satisfied, so now I’m only looking forward to Lee Hong Ki’s next drama :D