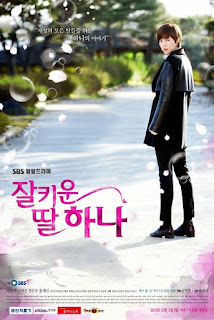 Joo Hyo Sun (Yoon Yoo Sun) has 3 girls, but she is pressured from her father in law to get a son, so he can inherit the 400 year Soy-Sauce business, that has been in that family since Joseon times. Due to a miscarriage, she can’t have any more children, so the husband decides to have a child outside the marriage. Jang Pan Ro (Park In Hwan) ends up having a son and therefore has secured them an heir. The husband dies soon after and leaves his household in a war, now Joo Hyo Sun gets kicked out, and her father-in-law takes in Jang Pan Ro and her family alongside her newborn son. Furious as she is, Joo Hyo Sun miraculously was pregnant before her husband dies. She takes the risk and give a birth to a healthy baby girl. She raise the girl as a boy, and returns to her old household after 10 years. The father in law takes in the ‘boy’ to let his 2 grandsons to battle it out for successor position. Will Jang Ha Na (Park Han Byul) be able to inherit the business as a boy, and revenge her mother and sisters for being kicked out wrongfully?

So the idea about having a one night stand and BAM the outsider woman gets a son, and BAM the original and rightfully Madame of the house has to leave, was too damn ridiculous for me. It made the whole 400-years business concept too stupid. Are their traditions so damn stupid and weak? I don’t think so, I think the writers had to start the whole story too quickly so they made the beginning too rushly. I applaud the writer's ability to write some infuriating plot that made me curse them the whole time but they still managed to make me continue, bravo.
There were a few things I didn’t like about this drama, first thing: Not knowing who the male lead is?! Seriously, nothing frustrate me as much as this, although I liked the Lee Tae Gon's character so much, I was stringed along for 122 episodes. Two: Almost ALL of the side characters are annoying. Three: The villains are just hateful and annoying without really much depth.  Last but not least: Can I just highlight again how much I detest not knowing who the male lead is? And this show almost dragged that question to the bitter end. To make it fair for the drama there were one thing I love in the drama, (drumbeat) Lee Tae Gon's character.  Why did they make such a wonderful character and let him cool his heel at the sidelines for most of the show???  I am sure it was all a conspiracy to make me watch 122 episodes just to catch a glimpse of him. Here's a man who can fight like a pro, who makes the 2nd lead look like a little boy every time they stand together and who is brave enough to confess his feelings but considerate enough to love the heroine from afar.  Oh, did I mention he also has a tragic background so he looks like a lost puppy at times?  Would I recommend this drama? Sort of.  I would recommend the show so you can see how awesome Lee Tae Gon's character is, but a finger on the first forward button is a must.