Can We Get Married Review 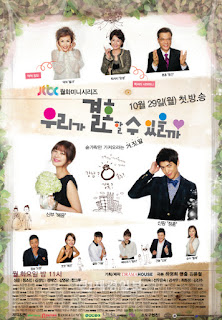 Title: Can we get married?

This drama revolves around four couples who all have different struggles with marriage.
Jung Hoon (Sung Joon) and Hye Yoon (Jung So Min) are a young couple with their heads full of love. Even though Hye Yoon is quite temperamental, Jung Hoon loves her for it and even lets her use him as a punching bag. The two become engaged after Jung Hoon proposes, but suffer backlash when Hye Yoon’s money –driven mother and Jung Hoon’s overbearing mother face each other head on. Now the supposed love wedding ends up as preparation nightmare.
Ki Joong (Kim Young Kwang) and Dong Bi (Han Groo) are a couple of five years, but when their best friends Jung Hoon and Hye Yoon become engaged, Dong Bi wants more out of their relationship. To her surprise Ki Joong refuses her and tells her that he wants to break up. To make matters worse few days later Ki Joong decides to get married to his father’s business partner’s daughter, so that his father will invest in his restaurant. This should make Dong Bi move on, but her heart doesn’t want to let go.
Hye Yoon’s older sister Hye Jin (Jung Ae Yun) married a divorcee Do Hyun (Kim Sung Min) whom she became pregnant with after he cheated on his wife with her. Ever since they got married she had been treated as a slave, which she had willingly done until she one day finds out that he has been cheating on her with a younger model. This makes her question her relationship with him, and whether or not he really loves her.
The last couple is a two times divorcee Min Ho (Kim Jin Soo) and old maiden Deul Rae (Choi Hwa Jung), who despite their old age fall in love like teenagers, but wonder if they should even be doing that at their age.
The drama focuses on the theme whether a couple should get married, or should stay married, and how their mothers/families are a big part of the separation and the misery of wedding planning…

I don’t know if you understood the review, but the drama is quite easy to follow and if you miss anything, they are quite good to repeat themselves.
It is one of those classic Korean dramas about family feud and incredibly stubborn mothers (like amazing). There was a point where I felt so happy that my mother is as mild a meddler compared to these. Like these women are not the classic “envelope-with-money-giving-so-that-you-stay-away-from-my-child” kind of women, they seriously go all the way (minus the horribly illegal).
The cast was wisely chosen, except for Jung So Min, whom I basically just dislike, or rather she is just so unlikable. I don’t know if it’s because of her characters but she just annoys me, and is such a under average actress. Sung Joon, who I am seeing for the third time in a drama, is quite good here. His character isn’t cool or dashing, he’s really just a mama’s boy who doesn’t know how to stand on his own two feet.
But the reason for watching this is the two couples acted by Kim Young Kwang, Han Groo, Jung Ae Yun and Kim Sung Min. Besides the stories being well-written, well-acted, and well casted, the chemistry is so amazing that I couldn’t stop watching this drama. The two youngsters who fear love more than anything and the fighting couple was just perfect for me. A double thumps up.
Okay so do I recommend it? Yeah, for people who like this kind of theme, but it might become a bit heavy later though…


This drama was too heavy for me. I felt like quitting it halfway through, but I’m not a quitter! So I continued the drama, but hell no I’m going to watch that again. I have read other bloggers have reported hating all the characters and finding the plot draggy. However, I’ve also heard that it’s realistic and more nuanced and well made than the typical Kdrama romance. All I know is that it was too draggy and the storyline were stuck at one point for 10 episodes straight! Favorite thing was how realistic the characters felt. The bickering moms annoyed me at first, and they still did at the end hahah. The main couple… well, lovely chemistry, but the actress annoyed me as much as the mum did, so very bad! The only positive about this drama were Sung Joon, yet again the main actor rescued the drama from a total disaster!