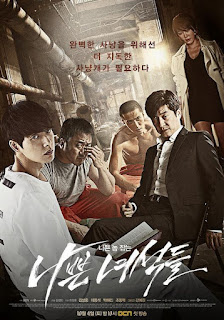 After the death of his son Chief Police Officer Nam Goo Hyun (Kang Shin Il) brings in the craziest person with a badge to find the killer: Oh Goo Tak (Kim Sang Joong) also known as “Mad Dog” by his juniors. The very killer is up to his 9th killer with same M.O, so Mad Dog Goo Tak decides to use the craziest method to find the murderer: by having criminals catch the criminal. He takes out three long sentenced prisoners out of jail to make a deal with them; for each murderer or criminal they catch (of which he assigns) they’ll get 5 years sentence reducing, but that only goes to the one person catching the criminal.
The three prisoners are: Park Woong Chul (Ma Dong Suk) a gangster/thug who is in jail for numerous of things, but has the advantage of being strong and short-tempered even the guards fear him. Jung Tae Sun (Jo Dong Hyuk) is a professional assassin or ‘hired killer’ who only got caught by giving himself up. And lastly Lee Jung Moon (Park Hae Jin) a genius with an IQ of 165 and a Mensa, turned serial killer, killing 15 people - though he doesn’t remember doing so.
Goo Tak and police officer Yoo Mi Young (Gang Ye Won) have to take care of those three, whiles taking care of them, but while looking through the case files Mi Young starts to question her senior - why did Oh Goo Tak choose these three, and how come he knows so much about Lee Jung Moon?

Okay so I started this while it was airing and completely fell in love with the storyline, however my enthusiasm kind of dropped as further we went. I really like OCN dramas, like I don’t think a single one of them has let me down, and this one didn’t, it just left me unsatisfied. First off I have no idea why, but the longer I saw the female police officer the more I disliked her and felt she was useless – to the point where her voice was annoying me. Second of all, the main story or the story which ‘connects them all’ felt forced, and really was quite boring. I should have been excited or intrigued, but I was just waiting on it to be finished honesty. Lastly the amount of ‘cases’ should at least be close to the amount of fighting, I mean I spent a lot of time to waiting – though sometimes it was quite cool.
On the other hand the cast was brilliant, well picked, and the dialogues were great like: “Are we beasts or are we human beings?” hit me quite hard tbh, because I never really think of the law as something wrong, but I guess I have to rethink some things…
All in all, another great OCN drama.

Bad Guys. Hm, the title says it all.. (totally my style). Every episode kept me on the edge of my seat and there was never a dull moment. It had great acting, an awesome cast, an intriguing storyline and expert directing and camera work. It had a lot of suspense and some really heartfelt moments. The bromance between these four men was great and I loved how each person had his own story. The thrill and action was gripping. I love fighting scenes but the ones in this drama were intense and I found myself immersed in them.
The one thing I feel like highlighting in this drama is Lee Jung Moon (Park Hae Jin), my favorite, who played the  genius serial killer. They called him Psycho. Yeah, he is a bit strange in the beginning but after the action unfolds you will understand him. I even cried when he cried. I really liked that Psycho look on him.
Yoo Mi Young was so annoying I can't even begin to describe it, even her voice could irritate me to death. Nevertheless I tolerated her because the rest of the characters were amazing.
Well, OCN.. About that season 2 ;)

Posted by Anonymous at Saturday, December 20, 2014