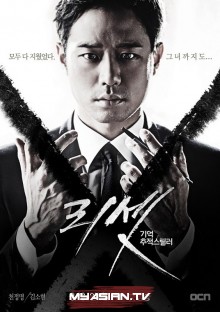 15 years ago, a girl was brutally murdered right before Cha Woo Jins (Chun Jung Myung) eyes, she was no other than his first love Seung Hee (Kim So Hyun). Obsessed he starts to look for the criminal, he even became a prosecutor in hope one day he would lock him behind bars. Now he only has 10 days to solve the crime before the statute of limitation on the case runs out. Then he meets a 15-years old high school girl named Jo Eun bi (Kim So Hyun), who looks exactly like Seung Hee. With their meeting comes new clues about old crime and closer to uncovering the truth, but little did they know, that now Jo Eun Bi became the new target.

I watched this because I love crime thrillers and apparently, OCN is the only channel that does it well in Korea. The story about finding the murder of his first love and time is running out is not new in dramaland, but I liked the excellent acting and top-notch mystery-solving, and that’s what made this one good. This drama was a little different from the other OCN dramas, and that is it only focused on the main problem, nothing else. To approach the drama that way had its positive and negative side effects, the positive was that we got all our questions answered, but the negative was that it got ‘heavy’ sometimes, that we actually needed something else to focus on, a side story or something. Although I wouldn’t criticize it for that, just… So you know ;)
All in all, it’s only 10 episodes, so if you are a mystery, thriller, crime fan like me, this would be an ideal drama for you!

Ehem, out of all OCN dramas this one should be forgotten. Not because it’s bad, but it should not be an OCN drama. It really took me forever to finish, mainly because there was nothing keeping me to watch it till the end, except Chun Jung Myung who despite the ridiculous plot and boring story made this drama watchable. His acting was all worth it, and honestly I don’t remember anything else beside him in this drama. Having a prosecutor-drama or crime drama if you want, hypnosis is one of the things you do not add as it is completely useless in court and under law. I don’t know if this scriptwriter thought about it, but if a prosecutor uses hypnosis under an interrogation he could lose his license.. SO WHY. I really don’t understand why it would be such a big part of the plot, and okay I guess I know why, but why use it as his job. Like he didn’t win any of his cases, so they decided to focus the drama on his lost memories? Like what. And they girl Soo Hyun acts is ridiculous too, and useless. I have no idea why they would add her there.
Anyways, is it recommendable? Naah, I wouldn’t recommend it.