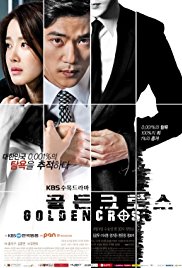 Golden Cross is a shadowy society that dominates the Korean economy and marketplace, with its deep financial power, only 0,2% of the elites know of this secret society. Newly graduated prosecutor Kang Do-Yoon (Kim Kang Woo) gets entangled into one of Golden Cross’ deal, when one of their plot gets his beloved sister brutally murdered, and coldly accused his father for it. Do-Yoon vows to get revenge from Seo Dong Ha (Jeong Bo Seok), the powerful man behind the organization. It only get more complicated when he finds out that Seo Dong Ha is the father of the woman he loves, his colleague, prosecutor Seo Yi Re (Lee Si Young). Despite her father Yi Re is a rightful and truth-seeking prosecutor, who does not leave any doubt in her cases. Meanwhile her father Seo Dong Ha, supports a protégée, businessman Michael Jang (Um Ki Joon), whose greed and ambition soon makes him challenge his mentor for the top spot. A clash of wills, fortunes, and egos commences.


From the beginning I decided not to watch this drama actually, that was because there were a lot of other dramas I wanted to watch instead, and the casting and plot didn’t really interest me so it never got on my list. But recently I read somewhere that Golden Cross was one of Koreas most underrated drama ever, and sometimes it’s true, never trust the Koreans rating system :b Anyway, so I watched it, aaaaaand… Damn, i gotta say, whoever said the drama were underrated spoke the truth. It was really exciting and good. When I watched the few first episodes, I said they destroyed my faith in humanity, and now they have the rest of the drama to restore that faith. I don’t want to spoil anything, but it wasn’t completely restored.
I loved the love story, they make me wonder if it’s possible to love a person that much.
The one I feel the most bad about is Um Ki Joon, ottokaae how is he going to restore his image, omo, he played the most hateful character ever. Here is a fun fact about the drama :b That character was supposed to be played by Park Si Hoo, but because of his scandal KBS decided to replace him. Despite his scandal I would rather have Park Si Hoo play it !