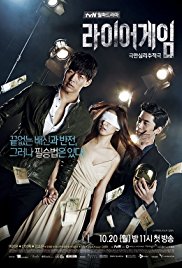 Nam Da-Jung (Kim So Eun) is a bright innocent college student, who trust people easily, even if she gets deceived every time. She works hard every day to pay her college tuition, and pay back her dads huge debt, which is the reason he left her alone. She was tricked by an old woman on the street, and gets involved in a reality program Liar Game, a game that rules relies on psychological survival skills, wherein the participants has to trick each other and the one who ultimately succeeds wins the prize money. Da-Jung is tempted by the huge amount of money to finally be able to pay off her father’s debts, so she joins the game. However, she ultimately is conned out of the initial money given to her. Desperately she seeks help from the genius ex-con swindler and former psychology Professor Ha Woo-Jin (Lee Sang Yoon) to help her win the game.


YES, a korean remake! Liar game, the original Japanese one, is by far one of my all-time favorite drama. The suspense, the confusion, betrayal, money and mystery is all what I like in a deceitful drama.  The Korean one is a little bit different than the Japanese, and that’s great therefor it’s not a copy! Anyway the new concept they put over the game were thoughtful, it went well with the original games so they didn’t destroy the core idea in the drama. I loved it, maybe because it’s such a long time ago I watched the Japanese (2008 maybe), it felt like a whole new drama, I of course forgot the rules and how the game were played, so I was pleasant  being deceived by the game yet again.
The actors… Perfect! They couldn’t have picked a better actor to play the Akiyama role. I was so frustrated in the beginning because Lee Sang Yoon really didn’t have the image for being a mysterious psycho professor, but he surprised us all I guess, he was the born actor for this role. Even Kim So Eun did a great job as an innocent girl. Wow and I’ll just point out Shin sung Rok, having pulled out four hit dramas this year is an amazing accomplishment, and he did a good job in every one of them, although he is playing the bad guy, he somehow makes you like and be scared of the character in the same time.
Now it can’t go faster to make a season 2!

Okay, out of the dramas that are made as remakes this one does a great job being honest to itself. I know I said that Naeil’s Cantabile is the most alike the original drama, but this one (I guess that has something to do with how long it was ago) has the most honesty out of all. It is a different story altogether, though most characters are the same or alike the Japanese drama and the ‘games’ are more completely the same as in the original. I love that they kept it up to date, by making it a reality show, which isn’t what the Japanese drama does, and I love that this antagonist is the villain all the way through the entire drama. The two male leads are perfect – when I liked the one I suddenly found myself liking the other, and then returning the first and so on.
One of the disappointments was the lead actress. I know it’s hard to play a gullible character (which is why I love Toda Erika for being the best at it) but she was quite unlikeable. Her facial expressions were the same no matter how she felt – she was more of a poker face than the villain (JUST KIDDING HE’S CRAZY GOOD). Another disappointment was the rule thingi about the money – you see in the Korean version they get a lot of money (A LOT) and in order to stop playing they have to return half of the money. Now I am not sure the worth of Korean money, but most of the players play because they already spent more than half. I mean seriously.. How much money can you use?! And lastly the ending: which was quite an unnecessary one.
So is it recommendable? Yeah, it has its pluses.