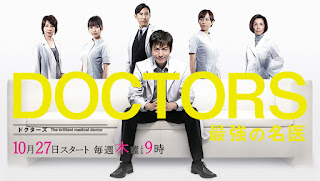 At Dogami Hospital the rules are very simple: the doctors have the say, everyone else is just less important. The main surgeons are incredibly self-centered and selfish. This kind of pride-driven hospital has lost many patients and a lot of the rest of the medical staff are not only fed up but also close to quitting. This all changes when Sagara Kosuke (Sawamura Ikki) is hired as a new surgeon. At first he seems humble, quiet and respecting of his fellow workers, but that changes when he decides to go behind everyone’s backs and performs a surgery. As he is about to get fired, the director of the hospital gets a hold of a video that was filmed during the operation, and she desperately begs him to stay after watching it, giving him a crazily high raise. Now his true colors seem to shine, he slowly but surely tries to change the hospital. This doesn’t go well with the other surgeons especially the ace surgeon Moriyama Suguru (Takashima Masanobu) who feels that the newcomer is butting too much...

I wasn’t really expectant of this drama for numerous of reasons: 1 I didn’t like the idea of Ikki in a drama (have this dislike for him after I watched Black President) and 2 because it’s 8 episodes. Which is kind of funny: since I made up my mind to watch it so I could change my perspective about Ikki, and I liked the fact that I could watch this drama in one day. Also I really felt like a medical drama, and this one did its job by giving me the things I wanted: medical, short and a change in perspective (a little bit). I don’t know the actor Takashima Masanobu acting as Moriyama, but he is weird. I don’t know if he was supposed to be funny (I laughed A LOT), but he had disturbing facials and he shook too much for an actor.
Anyways, the drama is interesting and pretty charming, though I kind of felt it was a shame that the idea was “too idealistic”, meaning Dr. Sagara is too focused on helping his patients that he didn’t really realize what it did to his co-workers (even though the drama showed it became better, it kind of is a lie if you ask me).
So all in all: a great medical drama with good acting.