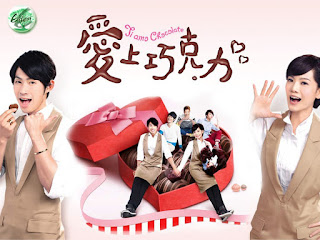 Fang Jia Hua (Van Ness Wu) is a stubborn and sometimes rude heir of Taiwan’s most famous food company. His mother left him when he was younger in order to follow her dream of making chocolate. This has made Jia Hua’s father hate chocolate, and even refuse to sell it as a product. One day Jia Hua has enough of his father’s tyranny and decides to follow his dream, which he has in common with his mother: to open up a chocolate store. So he leaves his father’s house and wealth, and leaves the house with only one bag of things. While driving, he bumps into a car that belongs to Hong Xi En (Joanne Tseng), who wants to sue him for the damages, but is also mistook for a boy by Jia Hua. Promising to pay back, he takes her family and her to dinner, only to find out that his cards are blocked, infuriating Xi En, who now has to pay for an extremely expensive dinner.
Adding it to his debt, she commands him to stay at his house, in order to make sure he doesn’t run away, but also makes him pay rent - expensive one at that.
As she and her family get a low income, Xi En is forced to work. As the local chocolate store is looking for workers she lies about her gender to get the job, and as fate has it she meets Jia Hua again who wants to buy the store, but when Jia Hua loses a bet he reluctantly has to work at the shop.
The two start working together, and slowly get attracted to one another, but Xi En cannot tell anyone about her secret or she’ll lose her job, and Jia Hua cannot tell anyone about his real identity since it might get people biased… What is going to happen?

Okay, so decided to watch this drama some time back, for one reason only: Van Ness Wu. I love this dude, yet I finished it because of Dou Zhi Kong who I remembered from Love Around. To be honest the main love story is nice and sweet, even envious but it kind dragged on for the last 20 episodes. The other love stories were okay, but my favorite was Lu Zheng Ting (Dou Zhi Kong) and Hong Xi Hui (Guo Shu Yao), just because the made me: 1 blush, 2 excited when they had screen time, and 2 they are so great together! Besides that their storyline was much newer and thrilling than the typical guilt-ridden story.
As a general the family stories and the love stories are very well though through and they are quite detailed. But somehow this one doesn’t become what I wanted it to be, and just kept on dragging on. Yes the actors are pretty good, and yes it is funny at times, but after the 60-point in the main story, it just gets LONG. So yeah, I seriously only watched the rest because of the second leads.
I don’t want to spoil anything, but I think I would recommend it to rom-com lovers, as it isn’t your typical ‘girl-dressed-as-boy’ story. It has MORE heart…