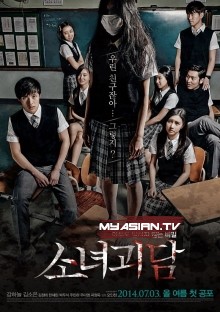 A story about a high school kid, In-Soo (Kang Ha Neul) who isolated himself from everyone because of his special gift, which makes him special from everyone else. He comes from a family filled with successful exorcists, the reason behind that is that they can see ghosts, but they are not the nice ghosts. One In-soo moves to a rural area outside Seoul with his also-seeing-ghost uncle, there he befriend a special girl. Soon after abnormal activities happens at his school…


I am not a fan of horror, no, I like horror, but I can’t watch them without getting scared of everything. So I try to stay away from them. Until I accidently discovered this movie, at first I didn’t want to watch it, but the story and star-filled cast was really tempting. So here I am, a Saturday night and scarred as hell. Okay, about the movie; it was very good aka very scary! They did a good job with the ghost makeup, but also the editing, the way they made the ghost pop out of nowhere really made a big impact. The actors were good too, Kang Ha neul and Kim so-eun were so cute together, I hope they will be casted together in a drama one day. The story were also very interesting, I was really surprised at the sudden twist in the middle, didn’t see that coming at all, in my opinion that is the most important of a movie; the story. I’m going to look for more Kang Ha Neul movies now :b

Posted by Anonymous at Saturday, November 15, 2014