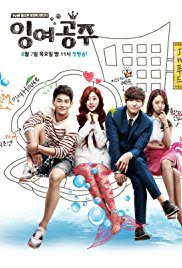 Ailee (Jo Bo AH), the undersea princess, falls in love with a human being. Because of love, she drinks a bottle of human potion, without even realizing the 100-day curse would be the consequence. She now has to find true love, amongst the humans, but how will a mermaid without money, clothes, a home, friends or family survive in this cruel world?

This may sound a little childish, but Ariel was one of my favorite Disney Princess (alongside Mulan and Jasmine), so when I heard this was about mermaids, I was really looking forward to watch this. At first I was scared it was going to ruin everything about mermaids (and then my childhood), but I don’t regret watching it! The only thing was it was short and the ending was rushed, but of course, it had to be since TvN had to cancel it, because of its low ratings in Korea (Why don’t international fans have a saying in this?).
The story was very cute and refreshing, and each character was unique and speciel, so if you are tired of all the serious drama there is recently with all their clichés, this could be a little breather for you. Plus this show is filled with beautiful people from left to right.