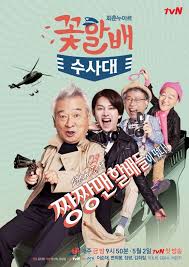 The lives of four detectives in their twenties are changed forever when an experiment gone awry, three of them rapidly age overnight and find themselves in the bodies of old men in their 80's. Only one of them stayed young, Park Jung Woo (Kim Hee Chul). As his suddenly much older colleagues struggle to deal with their new and unusual mess, Jung-woo shares in their hardships, joining them in their mission to find a way to reclaim their lost youth. Meanwhile, the team also continues to solve crimes, while the "grandpas" work at a delivery service as their cover.

This is a very quirky drama, it was perfect for the summer,(yup, it took me the whole summer to watch), it was a fun drama that doesn’t put really much stress on it, but it still has enough drama to keep you interested. My first impression of the plot was… unexpected. When dramaland introduced Granpas I assumed that Choi Jin-Hyuk and the gang, would gradually mature into Lee Soon Jae and his halbae pals (Granpa). Not a dive in the tank, and BAM, 80-year olds detectives. Although premature aging as a concept is kinda freakishly scary, the show’s choice of halbaes who replace their younger counterparts is hilarious. To end this on a nice note, it was an okay drama, I don’t regret watching it.

Bunji's Verdict
Okay, I liked it a bit more than I was expecting I would, especially the ending. As I was watching I laughed a lot, had some interesting stories to watch (CSI fan here), and I found the four actors (the grandpas and Heechul) to have a great team chemistry, which made it more enjoyable. Though I was a bit sad that they ‘youthful’ became old like 30min in the first episode, I kind of liked the old versions, and I kinds of felt that they did a great job acting as the young minded versions of their characters.
Another thing that annoyed me was that the main lead’s story was just too much of a focus, and yes I get that it is a focus, but it was really boring especially when we have this love story hanging about.. And it is a threesome. Like the female is in love with the lead, and the supporting is in love with her… And yeah the lead falls eventually for her, but it kind of is a silly way. I don’t know. I don’t mind old people, particularly when they are so great at their jobs, but the drama had much less of a seriousness, which it should have had.
Anyways, a funny drama with great actors, but somehow I wasn’t that satisfied…