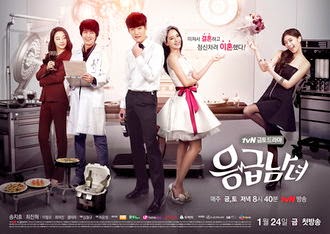 Oh Jin Hee (Song Ji Hyo) and Oh Chang Min (Choi Jin Hyuk) are a young couple who meet at college and fall in love. They decide to get married despite Oh Chang Min's family opposing, since his family is a doctor's family and Jin Hee is a dietist, and doesn't even come from a wealthy family. The two of them get married and have their stuggles living as a young newly married couple, trying to afford a living. Chang Min goes around hospitals trying to sell medicine and often comes home late drunk. Jin Hee stays at home developing depression. They end up fighting more and more often and in the end decide to seperate ways. 6 years later somehow destiny brings them together at a wedding and things only get more interesting when they meet as interns at the same hospital.

I absolutely loved this drama because of it's romance and comedy. It was hilarious all way through and kept me going. The only downside was the last two episodes which didn't really have thaaat much going on again. It was a very stable ending or just a plane ride through. However that is just a minor thing if you enjoy this kind of drama. The couple did great and the acting was just great. I liked that the second lead couple didn't "interrupt" the lead couple's story too much but just enough to keep me staying haha. I recommend this drama it's exciting, fun and romantic.

Besides this being a great drama, I think I was a bit too expecting of this one, since everyone was praising it. And yes, the beginning is brilliant, and even so the love story - like really my type of love story with the same kind of effects and emotions. But somehow I found it to be both draggy and kind rolling around in its own little world, wanting me to shake them up. I found that the second (and third) love story was dull, and completely unnecessary, even though the actors are brilliant. And somehow along the way they lost the entire ‘medical’ drama, along the way, and made it just a bit too melodramatic. Though I gotta say the medical part is daebak, also the situations are reasonable, meaning not those crazy ass procedures with heart surgery: I mean how would interns/residents be able to even do that?! But they keep it reak in this drama, and the growth is reasonable.
THAT was the negative about it: the good part is it is a very good Korean drama, which I can’t say for many. It has good social issues and kind of gives you a vibe of society as it is - which is bad LOL. And yet it is a romantic comedy with seriously the funniest scenes I have seen in a long time… And creative to.
To sum up, and great drama.