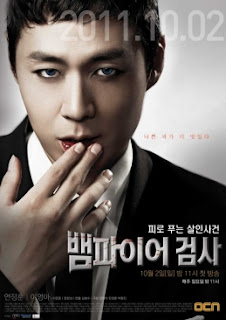 While racing after the main suspect that took the lives of many people, including his sister, Min Tae Yeon (Yun Jung Hoon) is hit by a truck as well as the man he chased. Climbing out of the turned over car Tae Yeon sees how suspect is stabbed by a man in a rain coat, and soon after he is attacked by a man who bites him in the neck. Ever since that night he has been able to see things, and visualize things which he never thought was possible. But on the other hand has an urge to drink blood. As the only person Tae Yeon trusted his secret with Hwang Sun Beom (Lee Won Jong), a hardworking and ambitious detective, often asks for Tae Yeons help whenever he feels weirdly about a case.
7 years later, Tae Yeon has been assigned to a special unit called “Prosecutor-Police Joint Special Investigation Unit”, which is also known by law enforcement as “Dead End Team” meaning they are most likely to be abolished and lose their jobs. Being the Team Leader he asks for Detective Hwang to be added to the team, and is assigned two more people: the analyst-intern Choi Dong Man (Kim Joo Young) and prosecutor Yoo Jung In (Lee Young Ah).
Together this team investigates and prosecutes cases, but for Tae Yeon his interest lies in the man with the black raincoat and finding out how his sister died.

Firstly sorry about the weirdly written summary, but I think you should be able to get the main points.
When I started this I had 0 expectations, like look at the name man.. But after I saw that it was the same broadcasting station as SIT10, I had to check it out, and I liked it. Despite some of the repeats I felt it was great storyline, and the cases where good too. Though one thing I really couldn’t wrap my head around was the speed of each case. I mean I know he is a prosecutor but it just feels halfhearted having the trial in the drama as well - and pretty useless also. Another thing I liked was that he isn’t all perfect, which I sort of expected, but more of a person with a problem.
If you are worrying about another “Twilight”, don’t be. I like this more than Twilight, (and I am a Twilight fan) because they make the vampire seem like real bad guys, not just as fantasy dreamy guys or whatever.

Hello. This is A.K.I.A. Talking…
Thanks for the great review of Vampire Prosecutor 뱀파이어 검사 (2011) Season 1! I enjoyed it a lot.
I added it to my collection of reviews for the show. The show has now an average score of 80%.
Here is a link to the page if you would like to give it a look:
http://www.akiatalking.com/2015/01/vampire-prosecutor-2011-season-1.html
Thanks again for the review. If you want to do something with my blog, please contact me.