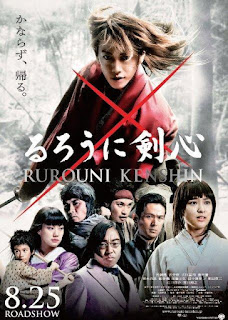 “About 140 years ago in the turbulent Bakumatsu era... There was an assassin called Hitokiri Battousai.
Following orders of the people of the anti-shogunate movement he was acting behind the scenes in Kyoto...” (Taken from intro of movie)
10 years after the new era had begun the famous assassin Hitokirir Battousai (Sato Takeru), now calling himself Himura Kenshi has retired and lives life as a ronin - a wandering master-less samurai. He walks around with a swapped blade: meaning that the blade can’t cut anyone but him. One day he meets Kamiya Kaoru (Takei Emi) who sees his sword and is sure he is Battousai, the one going around killing people and misusing her father’s name. The two soon find a common understanding when Kenshin saves her dojo and starts living with them.
When the country is led by law, the criminals have found ways to use that very law to make sure their dirty work isn’t noticed. This leads houses being bought by the rich - without or with force, which is used for making opium in the center of the city.
Both Kenshin and Kaoru reluctantly get involved when a woman called Megumi (Aoi Yu) seeks refuge in the dojo..

Having watched the anime as a kid, and read the manga as an adult, I have to admit I am pretty satisfied with the live action. Of course having in mind that there are two more movies coming, this one is a fairly good start and it is very well executed. The cast chosen for this movie are actors I have seen before, in either an idol dorama or a short drama, but yet they are acting really well here and somehow they make me relive my childhood, when I first started watching the anime.
Of course it being a Japanese movie and based on a manga it becomes very typical, but it does not ruin the overall movie.
I would recommend it actually even if you haven’t read the manga or watched the anime, because it is good.