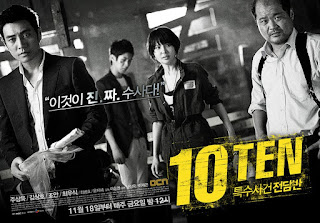 Baek Do Shik (Kim Sang Ho), better known as “Baek Dok Sa” (White Venomous Snake) for his clean cut cases, is a man with sharp eyes and a great instinct for finding evidence and clues. As he is called on a case to investigate a suicide, he immediately notices that it isn’t the case, and finds out that he is a big gambler. That habit leads him to a near casino, where he finds out the victim has a sister, no one knows about.
Nam Ye Ri (Jo An) is Phycology graduate from Seoul University, and works in the Crime Victim Support Center. Though she has a great sense of noticing when people are lying or hiding something, she tries hard to pretend she doesn’t know most. When a known police officer tells her boss to make Ye Ri find a missing person, even though she isn’t qualified she takes it, and her traces take her to a house which seems as an empty house.
When a hostess is found dead in her apartment, taped up and with fingers cut, the Korean Police Force is called into a meeting due to the suspicion that the murder is the famous Tape Bound Killing which happened years ago. The person introducing the case is Yeo Ji Hoon (Joo Sang Wook), known by “A monster hunting monsters”, who once before had encountered these killings. He is informed that he will be the Team Leader of the new unit called Special Investigation Team, a group with aces with the goal to find the serial killer.
Joining him is young blooded Park Min Ho (Choi Woo Shik), and by a twist of fate both Ye Ri and Do Shik appears at the crime scene as their cases are somehow strangely connected…

Okay so out of all the crime dramas out there this one most defiantly is the best ever made, and is so believable it gave me chills. And damn it’s both creepy and scary. When you have spent a lot of time seeing fake blood and badly made wounds, this one is groundbreaking, mainly because is so greatly made. Also the stories are so sad oh my God, like many of them are so upsetting. And realistic.
I have only seen Joo Sang Wook and Kim Sang Ho before, and I have to admit I really like them for those roles. Somehow the cast seem to fit every character well, even though I had my doubts along the line.
So do I recommend it? Well I don’t hate it, but I am not sure if everyone would like it, since it’s not that pretty classical Korean romanticized drama style, but a more honest realistic story. That means, you decide.