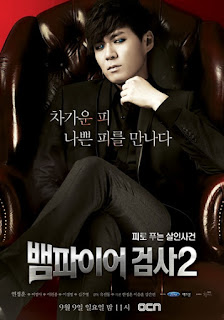 The second season continues with Prosecutor Min Tae Yeon (Yun Jung Hoon) trying to find his sister and the man that bit him 7 years ago, and the appearance of a new enemy.
Now with a new boss and new office the team is made official as “Special Case Division”, but for some reason the boss is not happy with the way the team is handling cases, especially since they tend to do things their own way instead of following the rules or asking the higher-ups. The team still continues with their cases in the way they are used to, and when they get a new member, Forensic doctor Jo Jung In (Lee Kyung Young) joins, they swiftly make him feel at home. But little does Tae Yeon know, the new member is linked to the past - the past where he was bitten by a certain vampire…

Compared to season one this one is way better. They either got a new director or they got a richer producer, because everything seems so good here. The best way to explain it is: think about the old Korean dramas where they pretend they are rich but you can seriously see that the characters have suits they have never worn on, and that they are all wearing fake Rolexes, even if you don’t know the difference. This drama seems more new, and the actors seem more into their characters. And I remember reading a comment that the main actress seems too feminine and weak in the new season, to that I say, just because you got a new haircut, did your eye brows and started wearing expensive makeup doesn’t make you weak, seriously. She is so badass even if she is ready for the catwalk! Besides her everyone else got character development, which is nice, and they storylines are more connected to the main characters than the supporting characters.
So watch it? Hmm, yeah, but you should watch the first season too, even though it isn’t that great compared to season 2.

Hello. This is A.K.I.A. Talking…
Thanks for the great review of Vampire Prosecutor 뱀파이어 검사 (2012) Season 2! I enjoyed it a lot.
I added it to my collection of reviews for the show. The show has now an average score of 73.7%.
Here is a link to the page if you would like to give it a look:
http://www.akiatalking.com/2015/01/vampire-prosecutor-2012-season-2-db.html
Thanks again for the review. If you want to do something with my blog, please contact me.