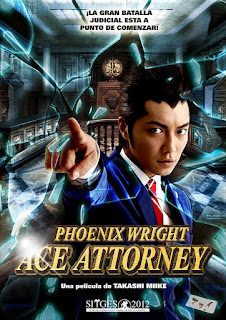 In a future version of Japan where technology is very much progressed, Attorney Ayasato Chiriho () has hired a new attorney in her office: Naruhodo Ryuichi (Narimiya Hiroki). Naruhodo is rookie that panics under pressure, and has hard time finding evidence or explaining evidence. Different is his childhood friend Mitsurugi Reiji (Saito Takumi) who has become a prosecutor and has not lost any cases before.
One day Chihiro calls Naruhodo and tells him she has had a breakthrough in a case she had been working on finding evidence for a long time, so she tells him to meet her at the office - only to find her dead. The prime suspect happens to be her younger sister Ayasato Mayoi (Kiritani Mirei) who has all evidence pointing at her.
After proving her innocence, Naruhodo tries to figure out the truth about the death of his mentor, but is interrupted by Mayoi telling him to watch TV, where the news is all about Mitsurugi being arrested for murder, and found with the murder weapon. This makes Naruhodo decide to take the case and prove his friends innocence…

I watched this out of two reasons: one Narimiya Hiroki and second is because tumblr kept showing me pictures of this movie.  Though I did finish it, I am not sure if this is a children’s movie or just one of those black humor movies, which I decided in the end I would asses as a children’s movie.
It is fun and pretty interesting, and I did find myself compelled by the storyline, even though I kind of knew who the real criminal was and all. The pace made it really entertaining and I kind of started to loose myself for 2 hours LOL. Narimiya is amazing as always, and I love him. If you want to see him in a comedy role this should be your pick honestly.
So is it recommendable? Yeah, but kind of childish..