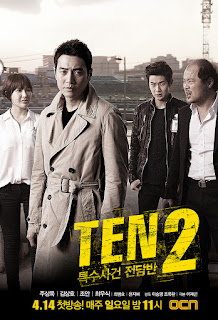 The second season continues with the search for the Tape Bound Killer, and the search for their Team Leader Yeo Ji Hoon (Joo Sang Wook) who disappeared when the killer had re-appeared. The team now disbanded due to the warrant search of Ji Hoon, secretly decide to find the team leader who has been accused of being the Tape Bound Killer. When they find the evidence left by Ji Hoon they all realize that all of it points at him being the killer - even when re-investigating the case. Confident in his innocence they continue to search desperately, but no matter what they do every piece they find points directly at him. And when they find out that Ji Hoon had been in the victim’s house few hours before her death, they become more and more suspicious…

I can’t say it’s bad, but I wasn’t exactly what I expected. I know this drama being amazing to begin with, having to compete with that and making it more; I have to say they didn’t really manage. It is very much like season one with the sad stories and all, but they really try to make the killer either so sad or pathetic that you immediately know who the killer is. Though the pace and the strong acting is the same, the overall just seems like a repeat. The only thing that saves this drama is the beginning, and the ending.
But I do recommend for those who have watched season one, just because of the last two episodes.. Much worth all the episodes..